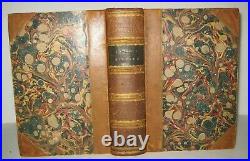 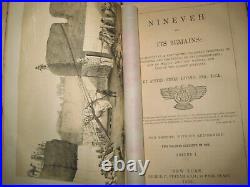 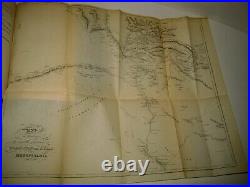 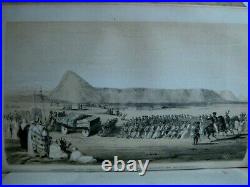 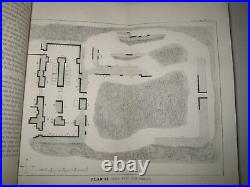 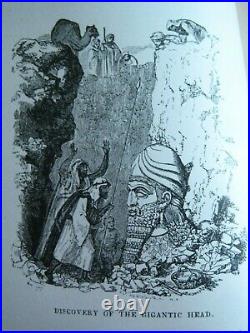 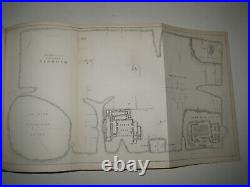 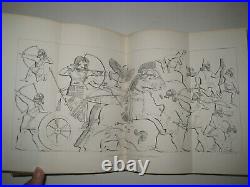 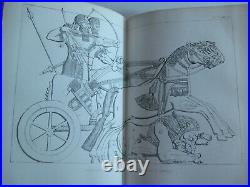 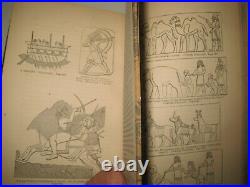 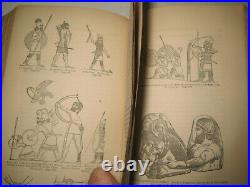 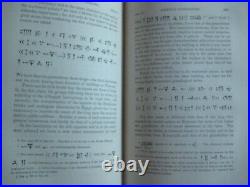 I ALWAYS HAVE a great selection - - and PLEASE. To see my son's old books. Title : - Nineveh and Its Remains. With an account of a visit to the Chaldean Christians of Kurdistan, and the Yezidis, or Devil-worshippers; and an inquiry into the manners and arts of the ancient Assyrians. NY, George P Putnam & Co. Size = apx 8.75" x 6" with 373. Leather with gilt lettering & design, marbled endpapers & page edges. With 2 beautiful color engravings. A giant fold out map of "Laynard's journeys in Kurdistan & Mesopotamia" apx.

18" by 14.5", 4 other smaller [double page size] fold-out maps, plus 2 fold-out pictures, and numerous other engravings. 2 volumes in 1 // from wikipedia. Nineveh was an ancient Assyrian city of Upper Mesopotamia, [now] located on the outskirts of Mosul in modern-day northern Iraq. It is located on the eastern bank of the Tigris River, and was the capital of the Neo-Assyrian Empire.

Today it is a common name for the half of Mosul which lies on the eastern bank of the Tigris. It was the largest city in the world for some fifty years until the year 612 BC when, after a bitter period of civil war in Assyria, it was sacked by a coalition of its former subject peoples, the Babylonians, Medes, Chaldeans, Persians, Scythians and Cimmerians. Its ruins are across the river from the modern-day major city of Mosul, in Iraq's Nineveh Governorate. The two main tells, or mound-ruins, within the walls are Kouyunjik (Kuyuncuk), the Northern Palace, and Tell Nab Ynus.

Before abandoning archaeology for politics, Sir Austen Henry Layard (1817-94) carried out major excavations in Mesopotamia between 1845 and 1851, uncovering important evidence of ancient Assyrian civilization. Although he originally believed that Nimrud was Nineveh, he later confirmed that Kuyunjik was the location of the ancient city.

First published in 1849, this book is a mixture of excavation report, ancient history, anthropology and travel writing. Layard's excitement at the extent and importance of the finds as soon as digging commenced is clearly conveyed, and he places Mesopotamian history in the context of the more familiar biblical and classical worlds. This book covers the background to the excavations, the first discoveries, and the difficulties with Arab authorities and local workmen, observations on the inhabitants, culture and history of the region, plus more. Photos carefully as they are part of the description.

All of my books are VERY OLD and have 100+ years of wear to varying degrees. Map - large map has a small tear near the gutter. Boards - very secure, wear to the leather.

Inner hinges - taped with strong black tape. Pages - generally very clean -only a few 5? Rips /folds - no rips or folds that I saw. Other - the marbling on the text block edges is still bright , other than the joints and taped hinges - it's a good, solid, & clean book! Please Add me to your Favorites list.

AND check back now and then to see what's new! If you have trouble, contact me.

And remember -this book is very old and may have accumulated bad smells along the way [musty basement/ mildew/ smoke] - I have found that dryer sheets in them for a few months makes a world of difference! As far as I can tell -this book has no bad smell.

LIFE IS SHORT -and there are better things to do than type, feel free to copy my text if it saves you time! THE FOLLOWING is from archive. Org, and usually has several typos. Early History of the Hebrews The Patriarchs The Departui'e from Egypt, CHAPTER II.

The Desert The Invasion of Palestine The Judges. The Kings, until the Captivity, CHAPTER IV. The Restoration Misfortunes of the Hebrews The Maccabees Gradual Ascendancy of Rome, 40 CHAPTER V. The Roman Government, and the Destruction of Jerusalem. Ancient History of Assyria, CHAPTER II.

The Wars with the Samnites, the Latins, and Pyrrhus. The First Punic War, CHAPTER VI.

From the Invasion of Persia by Zinghis Khan to the Present Time. The Ancient and Classic History of India, CHAPTER II. The Early Mahometan Invaders and Conquerors of India The Afghan Dynasty Timur the Tartar, CHAPTER III. The Mogul Dynasty, Baber, Akbar, Jehanghu-e, Aurengzebe Decline of the Imperial Power, CHAPTER IV. Early European Discoveries and Conquests Expeditions of the Portuguese and Dutch.

The Early English Expeditions and Settlements The East India Company Contests with the French CHAPTER VI. The British Conquests in Bengal The Wars with Hyder Ali and with the French.

The Wai-s with Tippoo Saib, and the Conquest of Mysoi-e, CHAPTER VIII. The Mahratta Wai- Conquest of Central India, CHAPTER IX. The Pindaree War, and the Final Overthrow of the Mahrattas. Native History of the Chinese. Characteristics of the Inhabitants of China.

The Rival Caliphs of Damascus and Mecca Triumph of Abd'Almalec, CHAPTER XIII. Revival of the Spirit of Conquest The Reign of Waled Final Subjugation of Northern Africa, CHAPTER XIV. The Conquest of Spain, and the Invasion of France, CHAPTER XV. The Division of the Caliphat The Dynasties of Spain, Africa, and Bagdad Fm-ther Conquests Decline of the Saracenic Power, CHAPTER XVI.

The Tai-tar Conquests and Invasions, CHAPTER XVII. The Tmks The Seljukian Dynasty, CHAPTER XVIII. The Turks The Dynasty of Othman The Ottoman or Present Tm-kish Power. Ancient History of Spain The Carthagenians, Romans, and Goths The Saracen Conquest, CHAPTER II. The Formation of New Christian States: Asturias, Navarre, Leon, Castile, and Arragon Continued Contests with the Moors Union of Leon and Castile, CHAPTER III.

To the Death of Charles U. The last Monarch of the Austrian Line, CHAPTER VI.. The House of Bourbon, the French Revolution, CHAPTER VII.

Ascendancy of France Abdication of the King, CHAPTER VIII. Dethronement of the Bourbons, and, Accession of Joseph Bonaparte Resistance of the Spaniards. The Peninsular War, CHAPTER X. Expulsion of the French, and Restoration of the Bourbons. The Ancient Germans The Empire of the West The Elective Empire CHAPTER II.

The Reformation Continued The " Theses " of Luther Contests with Rome The Diet at Worms, 409 CHAPTER VI. Spread of the Reformation ^The Bible The Peasant- War Persecutions, CHAPTER VII.

Religious Disputes The Thirty Years' War. Early History of Russia The Tartars Ascendancy of the Muscovite Dynasty Ivan the Great, 425 CHAPTER II. Ivan the Terrible Foreign Wars Accessiom of the Hoase of Romanoff, CHAPTER III. Peter the Great Peiils of his Youth his Efforts for Refonn Cruelties Travels in Europe War With Charles XII. Peter the Great, continued Disastrous War with the Turks Fresh Conqueste and Improvements- Death of his son Alexis Expedition to the Caspian Sea Death of Peter, CHAPTER V.

The Saxon Invasions and the Heptarchy, CHAPTER III. The Anglo-Saxon Kings, CHAPTER IT. The Danish Kings, and the Last of the Saxons, CHAPTERR. Stephen and Henry 11., CHAPTER VII.

- - SWITZERLAND, lESSER EUROPEAN NATIONS. The item "1853 ANTIQUE BOOK ANCIENT RUINS NINEVEH IRAQ ARABS PERSIA CHRISTIAN HISTORY" is in sale since Saturday, August 31, 2019. This item is in the category "Collectibles\Cultures & Ethnicities\Middle Eastern". The seller is "craminn" and is located in Sherwood, Oregon.