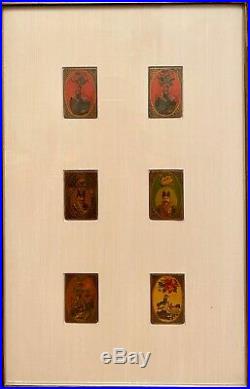 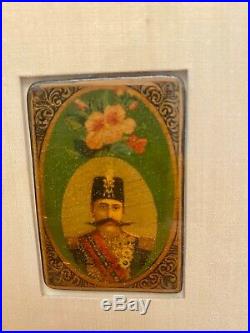 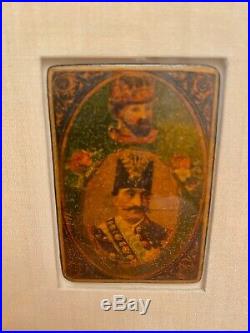 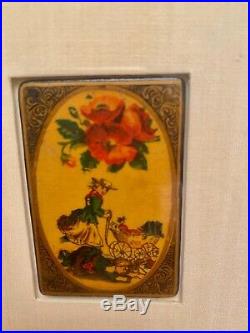 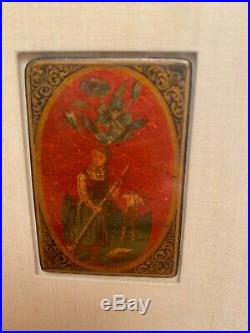 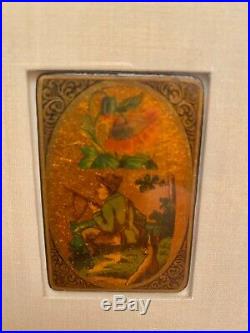 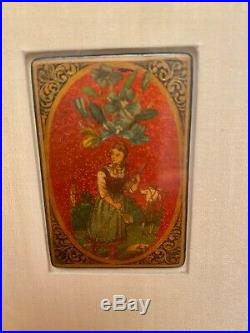 (6) 19th century or earlier hand painted Polychrome As-Nas Persian Qajar miniature Playing Cards mounted in a frame. The first portrait is belong to Naser al-Din Shah Qajar, also Nassereddin Shah Qajar, was the Shah of Persia from 5 September 1848 to 1 May 1896 when he was assassinated. And the second is his son Mozaffar ad-Din Shah Qajar was the fifth Qajar king of Persia, reigning from 1896 until his death in 1907. Cards measure : 1.5x 2.35.

Wilkins claims that accounts of As-Nas date back to the 17th century, and at that time a 25-card pack was used, with 5 suits, each suit having one court card and four numeral cards. Cards from the 19th century with the classic As-Nas designs can be found in various museum collections. Some rarer examples are estimated to be from the late 18th century. [6] According to Murdoch Smith, by 1877 As-Nas cards were'gradually falling into disuse, being replaced by European' types.

The game of As-Nas largely fell out of fashion by around 1945. [8] However, As-Nas may have persisted a little longer in rural areas. In his work published in the 1960s, Arasteh writes that "rural life in Iran revolves around traditional practices that have persisted unchanged for centuries". [9] In a passage regarding Muslim values, he writes the Qashqai, and probably other tribes, permit the men to drink alcoholic beverages.

In their leisure time some tribal khans also enjoy smoking opium. As, similar to poker, is a popular card game among tribespeople. The item "(6) 19th Polychrome As-Nas Persian Playing Cards.

Two Portrait Of Qajar Kings" is in sale since Thursday, April 16, 2020. This item is in the category "Antiques\Asian Antiques\Middle East". The seller is "silkroad1431" and is located in Columbus, Ohio. This item can be shipped worldwide.