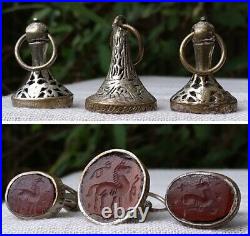 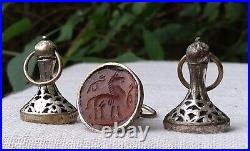 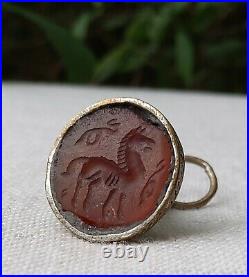 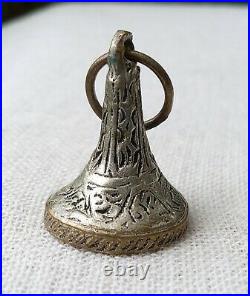 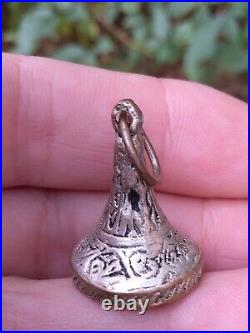 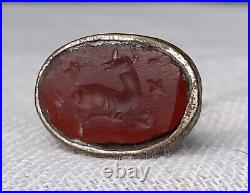 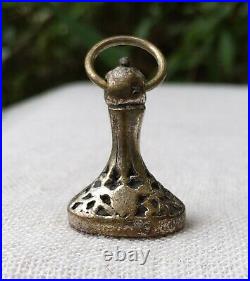 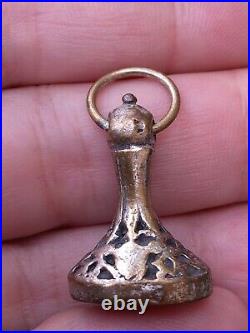 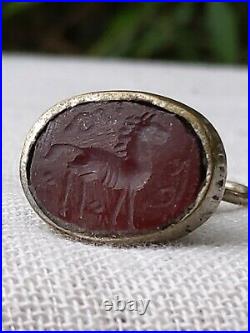 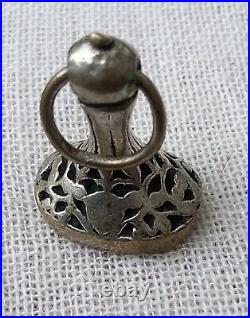 Sasanian Carnelian Seals Mounted on 19th c. Persian Qajar or Mughal Plated brass Fobs. We cannot be held responsible of any delay as a result of border controls at the country of destination.

There is also some dirt deposits embedded in the gap formed between the stone and the brass mounts. The items were not cleaned while in my possession. The mounts seem to have a silver plate over the brass but a lot of it has come off with time, some of the fobs may have more of a silvery tone than the others, but in all the plating is uneven.

The round fob seal shows a very small dent in the middle of the cone area (see pic). The original invoice and receipt is available for viewing if required as well as pictures of the original lot and the description cataloqued on the day of the sale. The items do not come with certificate of authenticity or any other paperwork related to the background of the pieces. IMPORTANT INFORMATION: please use pictures to judge condition for yourself. Pictures are considered part of the description. All sales are "as is". I cannot yet guarantee the age of the pieces stated on this description to be 100% accurate since I'm still waiting for a confirmation from the British Museum. The description provided must be taken solely as a guide and I encourage all prospect buyers to conduct their own investigation and appraisal taking advantage of the many pictures provided with the listing. Unfortunately since the pandemia hit the UK, the British Museum has been closed for most of the time and only reopened recently and seems to be working with the minimum staff required.

So, at the moment I'm not able to date this items with a 100% cercertainty, not until the items are finally taken for a proper item identification process. I'm only a collector, not an expert.

I recommend as material for consultation and investigation related to the identification of these seals to have a look at the British Museum collection website. A simple search about sasanian seals or seal-stamps should provide enough descriptions and images to compare to the seals here listed. I left some links to pages below related to some of the seals on the museum collection; some bear a stricking resemblance to the items here listed with standing and kneeling winged horses, stags, bulls and other beasts with pahlavi inscriptions or other decorations to the sides. Also there are some that show sealings of the image imprinted using seals similar to the ones shown on this listing.

I can also recommend a book written by Venetia Porter, a curator of Islamic and Contemporary Middle East art at the British Museum (since 1989) The book is titled "Arabic and Persian Seals and Amulets in the British Museum " the book has many pictures but seems to be based on seals and amulets that contain arab and persian calligraphy and verses from the Qur'an. Historic background: The Qajar dynasty was an Iranian royal dynasty of Turkic origin, specifically from the Qajar tribe, ruling over Iran from 1789 to 1925. The Qajar family took full control of Iran in 1794, deposing Lotf'Ali Khan, the last Shah of the Zand dynasty, and re-asserted Iranian sovereignty over large parts of the Caucasus.

The Sasanian Empire or Sassanid Empire, officially known as the Empire of Iranians (Middle Persia) and called the Neo-Persian Empire by historians. Was the last Persian imperial dynasty before the arrival of Islam in the mid seventh century AD. Named after the House of Sasan, it endured for over four centuries, from 224 to 651 AD, making it the longest-lived Persian dynasty. The item "Ancient Carnelian Sasanian Seals Pre Islamic Later Mounted on 19thC Persian Fobs" is in sale since Saturday, October 3, 2020. This item is in the category "Antiques\Asian/Oriental Antiques\Islamic/Middle Eastern".