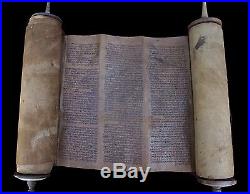 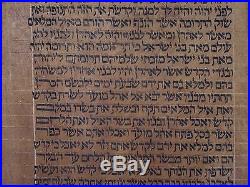 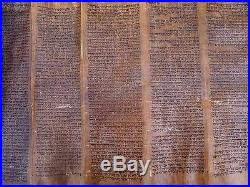 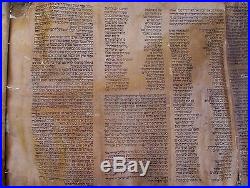 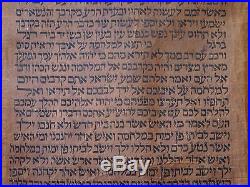 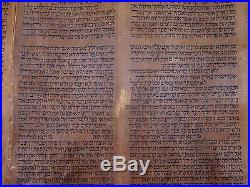 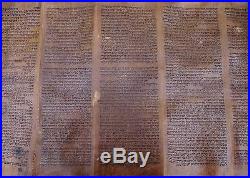 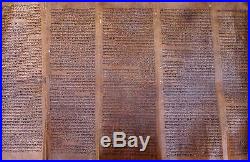 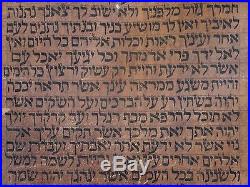 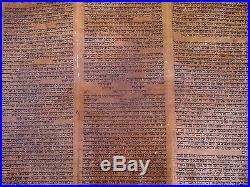 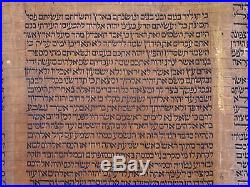 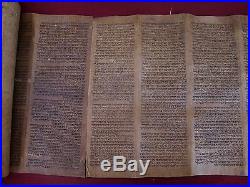 Written with black ink on gevil, i. Parchment made from the whole hide rather than split, processed for writing on the hair side only, and prepared with a mixture of salt, flour and mey afatzim [wasp residue/gall-nut water] resulting in the typical brown color of a Spanish Torah Scroll; comprising 49 gevil sheets, each of three to five columns; total of 186 columns. Horizontally and vertically ruled in hard-point in monumental Sephardic square script. All section tightly sewn with natural animal string called Giddin which is made from the leg sinews of a kosher animal.

I have added quite a few pictures from all different parts of the scroll please review pictures as part of the description. Occasional erasures or patches with corrected text clearly written over, occasional defects in sewing between membranes, sometimes repaired by vellum patches on verso, occasional tears.

Complete scrolls of this age are seldom seen in synagogues or available due to their age. The scroll considering its age is preserved and in good condition and will stay beautiful with care for centuries to come. Included with the scroll comes a pair of wooden handles.

I have added quite a few pictures from all different parts of the scroll for you to see, please view photos as part of the description. Please Review Pictures As Part Of The Description. The present scroll is written in the characteristic thirteenth-century monumental Sephardic square script.

In addition to the script, there are textual indicators that enable to identify the custom in which a manuscript was produced by examining certain scribal traditions which varied according to location. The biblical passages that lend themselves to this type of analysis are the two poetic songs included in the Pentateuch, "The Song at the Sea" (Shirat-haYam) Exodus 15 and "The Song of Moses" (ha-Azinu) Deuteronomy 32. The layout of the "Song of the Sea" in the present scroll follows the original, authentic version of Rabbi Meir ben Todros ha-Levi Abulafia Meir ben Todros HaLevi Abulafia c.

1170 1244, Burgos, Spain, also known as the Ramah where the final two lines of the song are not divided into only two sections, while Maimonides, following the Aleppo Codex, felt that the two final lines should be devided into two sections. Abulafia also differed from Maimonides on the manner of writing the other epic biblical poem, The Song of Moses. According to Abulafia and in agreement with the ancient Spanish traditions, Abulafia held the opinion that the poem should be written in 70 lines, as in our scroll, while Maimonides, again following the Aleppo Codex, felt that it should be written in 67 lines. In Sephardic Torah-scrolls written after the expulsion in the lands of the Sephardic diaspora, both songs are always according to Meir ha-Levi Abul'afia, while only the Yemenites follow Maimonides' order in both songsParchment measures approx 19 inches in height. Actually owning a , genuine original, beautiful, Torah Bible scroll 400 year-old as a family heirloom and stunning display item for your home.

An ancient Torah scroll bible makes the ideal family heirloom. You and your children can gain a deeper appreciation for the Bible by holding one of the earliest Hebrew writings in their hands. Just gazing upon its ancient writing style and thick deer parchment brings a sense of reverence and awe, and reminds one of the sacrifices made by the early Scribers to bring us these treasured early copies of G-d's Word. What an amazing conversation piece and attention-commanding display item for your home! And what a magnificent gift for a very special occasion, or for the person who has everything. Not what you are looking for? Approx dimension of carton 4.5 ft x 14" x 9". Ancient Moroccan Torah - YouTube. The item "ANCIENT COMPLETE TORAH BIBLE MANUSCRIPT SCROLL DEER PARCHMENT 450 YRS MOROCCO" is in sale since Friday, March 28, 2014. This item is in the category "Antiques\Manuscripts". The seller is "danbaruch" and is located in Israel. This item can be shipped worldwide.