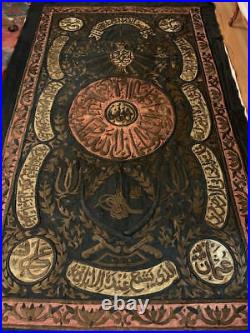 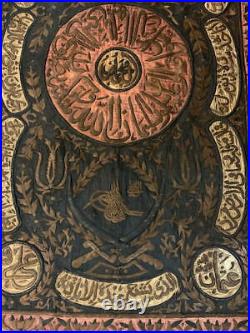 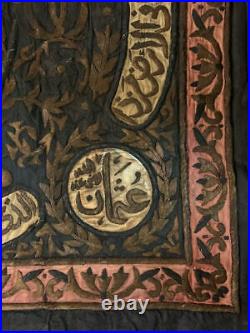 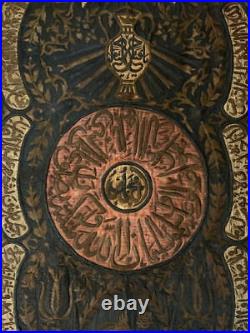 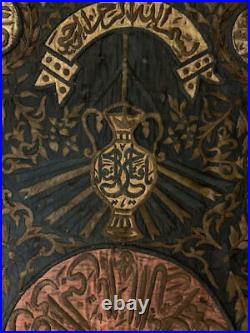 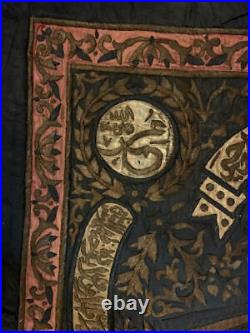 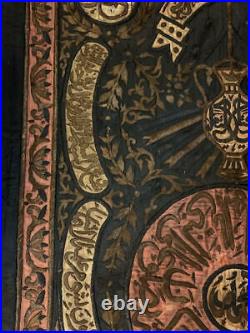 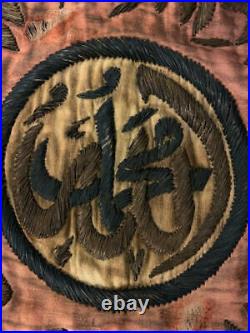 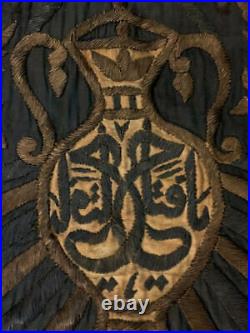 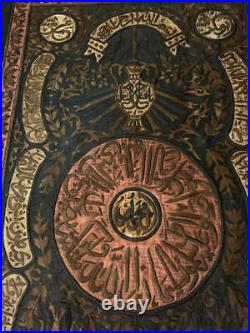 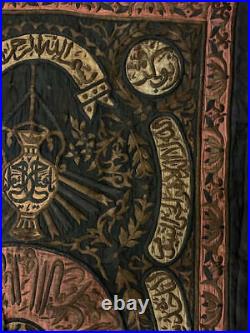 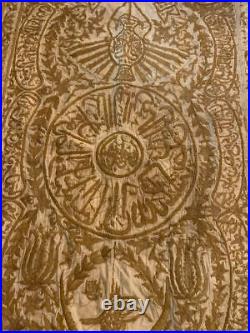 Antique Islamic Ottoman Holy Mosque Curtain Signed Tughra of Abdul Hamid II. A remarkable Antique Islamic Ottoman Holy Curtain with Metal Embroidered Islamic Calligraphy. This Holy textile was made during Ottoman Dynasty ordered by the Sultan Abdul Hamid II to be used in the Holy Mosque and it has the Tughra (Signature) on it in the lower Middle section of the Curtain. The Holy Curtain is from 19. D as it has the Tughra of Abdul Hamid II who was the Sultan of Ottoman Dynasty during 19.

This curtain is hand embroidered masterfully with metal wires and is very heavy. These types of Holy curtains are known as the most valuable and important Islamic sacred items which are used for their positive and holy energies as they were kept in Important Mosques for long times. Most of these curtains were sent to Makkah and Madinah Mosques to receive blessings and were brought back to the Sultans. During the ottoman dynasty the Sultans had control over the holy cities of Makkah and Madinah and one of their titles were Khadim al Haramayin al Sharifayn which is now the title of the Saudi Arabia's King. This title means the servant of the two Holy Mosques (Makkah & Madinah). Although the Ottoman Sultans had this important Islamic Title and were known as the Khalifa of the Islamic world, they never visited these Holy Mosques, knowing that they must be present in the Capital for security reasons, so it was a custom to send such valuable curtains and items to these Mosques and later having them sent back to them for their blessings. Bellow I give a full description of the inscriptions on this curtain for your information. On top middled: Bismillah al-Rahman al-Rahim "In the name of God, the Most Gracious, the Most Merciful". In the Middle Top in the shape of Lantern: The word "Ya Fattah" meaning "O the Solver" is written two times in a mirror format like a light in the lantern. The word "Fattah" is one of the 99 Names of God in Islam and has the following meanings, The Supreme Solver, The Opener of all Locks and Problems, The Reliver, The Conqueror of all, The Victor. In the center: There are two circles in the middle of the curtain. The small one has the name of God and the Prophet Muhammad. Around that is a bigger circle which has one of the most famous verses of Quran, Surah Ahzab Verse 56: Allah and His angels send blessings on the Prophet: O you that believe!

Send your blessings on him, and salute him with all respect. In the four corners: there are four small circles in each corner of the curtain which has the name of the four righteous Khalifa (Leaders) of Islam after the Prophet, namely Abu Bakar, Umar, Uthman and Ali. Around the whole curtain: The inscription around the whole curtain is one of the most famous sections of the Quran known as the Throne Verse or Ayat al Kursi. This verse is the 255th verse of the 2nd surah of the Quran, Al-Baqarah (Q2:255).

The verse speaks about how nothing and nobody is regarded to be comparable to God. This is one of the best-known verses of the Quran and is widely memorized and displayed in the Muslim world. It is often recited to ward off evils and all problems. None has the right to be worshipped but He, the Ever Living, the One Who sustains and protects all that exists. Neither slumber, nor sleep overtake Him. To Him belongs whatever is in the heavens and whatever is on earth. Who is he that can intercede with Him except with His Permission? He knows what happens to them (His creatures) in this world, and what will happen to them in the Hereafter. And they will never compass anything of His Knowledge except that which He wills.

His Kursi extends over the heavens and the earth, and He feels no fatigue in guarding and preserving them. And He is the Highest, the Greatest.