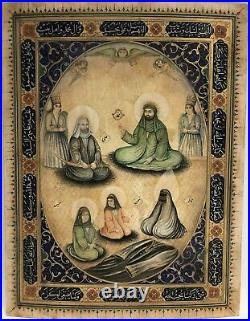 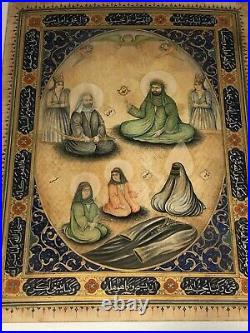 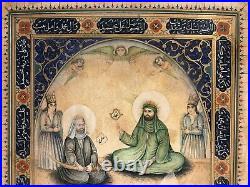 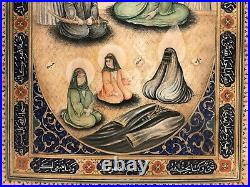 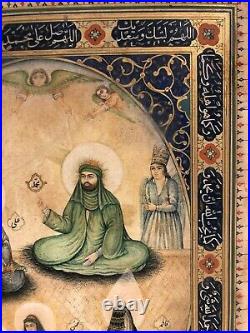 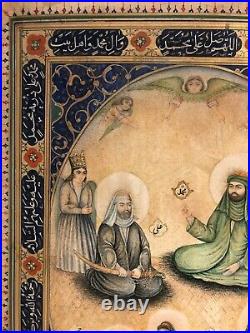 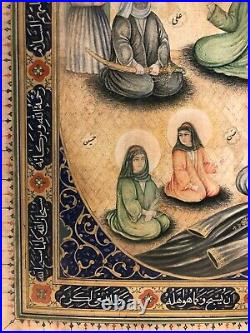 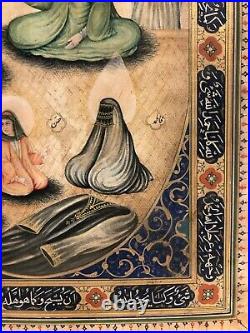 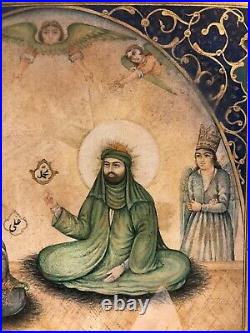 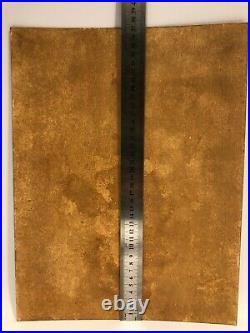 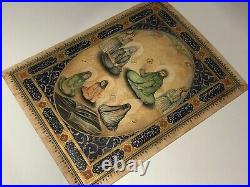 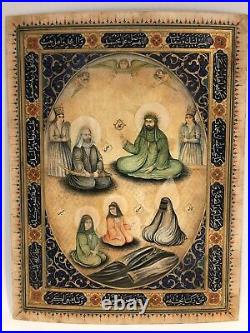 A Beautiful Antique Shamayel Painting from 18th - 19th Century Qajar Dynasty, Persia with fine details and beautiful calligraphy. This remarkable painting is made on paper with natural color pigments and has beautiful high quality calligraphy.

This is the painting of the Prophet Muhammad and his family. The characters of the painting are identified with their names written in Arabic script. The prophet and his family are surrounded and protected by the God's main four angels known as the archangels, Gabriel, Mika'il, Raphael or Israfil in Arabic and Azrael.

This painting refers to what is known in Islamic Tradition as Ahl al-Kisa. Ahl al-Kisa or the People of the Cloak, are the Islamic prophet Muhammad; his daughter Fatimah; his cousin and son-in-law Ali; and his two grandsons Hassan and Husayn.

They are also called Aal al-Aba and in Persian Panj-Tan, meaning'the Five'. The origin of this belief is found in the Hadith of the Event of the Cloak and the Hadith of Mubahala. This hadith is graded authentic by Shia Muslims and Sunnis, however many Sunnis plead a different interpretation. The hadith is an account of an incident where Muhammad gathered Hassan, Husayn, Ali, and Fatimah under his cloak. This is referred to in several hadiths, including within Sahih Muslim, in which Muhammad is quoted as saying Ahl al-Bayt, or the People of the House. Generally, Sunnis also accept the spiritual significance of the event of purification as exalted in the Quran and elaborated upon by Saheeh Hadith, but do not subscribe to the political authority that the Shia infer from this belief.

A hadith attributed to'A'isha reports. That God's Apostle (may peace be upon him) went out one morning wearing a striped cloak of the black camel's hair that there came Hasan b.

He wrapped him under it, then came Husain and he wrapped him under it along with the other one (Hasan). Then came Fatima and he took her under it, then came'Ali and he also took him under it and then said: God desires to take away any uncleanliness from you, O people of the household, and purify you [thorough purifying]... Sunnis tend to view this as Sahih and have included it in Sahih Muslim. Size: 37.5 x 29 CM 14.76 x 11.41 Inches. The item "Antique Islamic Art 18 19 Century Qajar Painting of The Prophet & His Family" is in sale since Wednesday, October 14, 2020. This item is in the category "Antiques\Asian Antiques\Middle East".