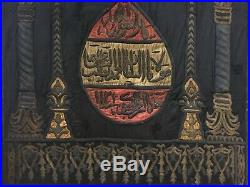 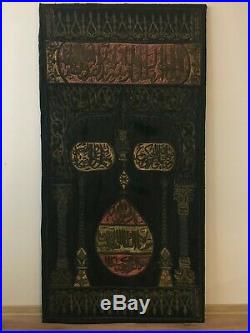 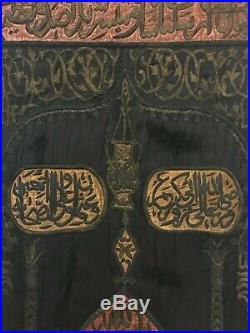 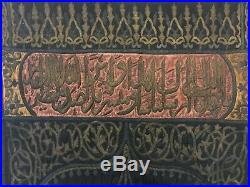 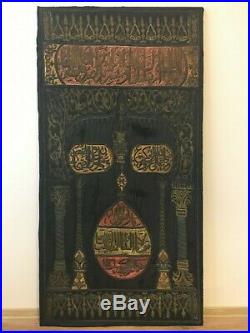 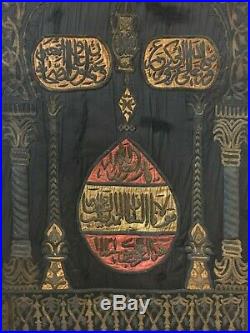 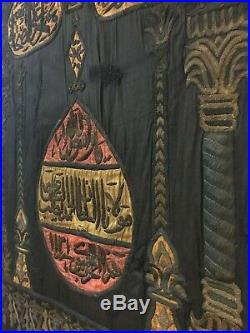 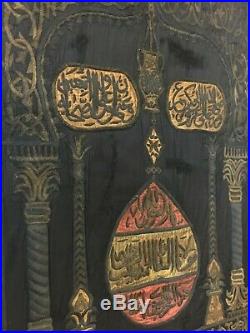 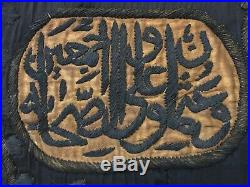 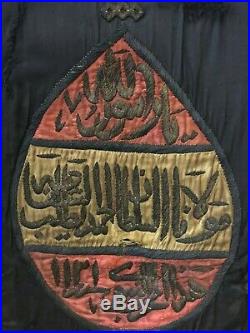 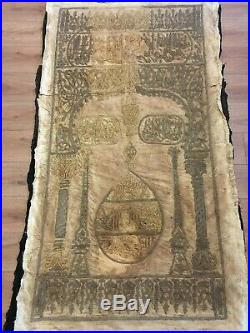 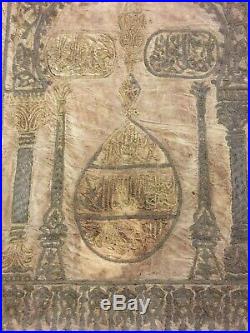 An Important Early Curtain from The Tomb of The Prophet (Hujrat al-qabr al-nabawi al-sharif) in Medina, Ottoman, a period of Sultan Ahmet III r. This is a remarkable handmade and metal hand embroidery heavy curtain for the Holy Mosque in Medinah (Masjid Al Nabawi) ordered by the Ottoman Sultan. These amazing Islamic Curtains are very import artifacts of Islamic Heritage and Art in the Ottoman Dynasty. For most of the Ottoman History, they ruled over most of Arabia and the Ottoman Sultans were also known as the Khademain Haramayn Sharifayn or the Servants of the Two Holy Mosques (Makkah & Madinah) The title of the Islamic Khalifa and the King. Although the Ottoman Sultans where the Khalifa of the Islamic World at their time and also King of Makkah & Madinah, none of them ever visited these holy cities and could not do Haj or Omra which is very important in Islam, because they were afraid of enemies and war in their absence.

Therefore for showing their love and respect for the holy mosques of Muslims every year, they ordered many lavish and extraordinary curtains and items with beautiful calligraphy and Islamic designs for the decoration of the two holy mosques and after a year was completed all these items would come back to them for their blessings and special spiritual energies they had, being placed in the holiest mosques of Islam for a year. This particular wall hanging curtain is extremely beautiful with super fine details and calligraphy. It is one of the early Ottoman Curtains belonging to the Sultan Ahmad III. In the Middle Top, you can see the word Ya Fattah , written two times in a mirror image, inside a lamp shape hanging from the top as a representation of light. Fattah is one of the most important and used names of the 99 names of God which is used for prayers by Muslims.

The word means; The Opener, The Revealer, The Granter of Success and that is why it is used when people asking God for any help and He as the Granter of success and everything would give it. On both sides of the lamp, you can see the names of the Four Khalifas known as The Rightly Guided Caliphs, Abu Bakr, Omar, Uthman, and Ali. Bellow it It is written : Ya Rasool Allah , Meaning Oh, The Propeht of God refering to the Prophet Muhammad. Bellow that is the Name of The Ottoman Sultan, Ahmad III. And at last the Location and date is mentioned: Haza Mihrab Al Nabawi, Meaning: Here is the Mihrab (The Qibla wall) of the Prophet's Tomb and date 1121 Hijri.

If you look at the back of the curtain you can see the amount of work and effort in the creation of this masterpiece. The work is entirely handmade with master craftsmanship.

There are small signs of repair on the black fabric of the base in a few areas. As it is mentioned on the curtain about the Date & Location of the item, this amazing curtain was made for the Mihrab Nabawi inside the Prophet Muhammad's Tomb in the Masjid al Nabawi in Madina. It is extreamlly Collectable, Rare and Valuable. The item "Antique Islamic Curtain From The Tomb of The Prophet Madina Kiswa Ottoman 1720s" is in sale since Tuesday, November 12, 2019. This item is in the category "Antiques\Asian Antiques\Middle East". The seller is "ethics-antiques" and is located in Rocklin, California.