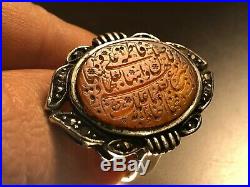 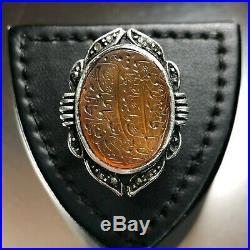 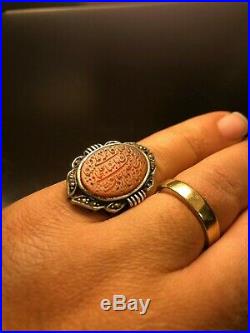 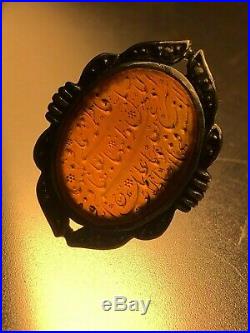 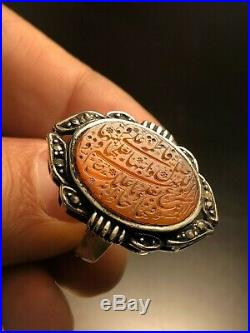 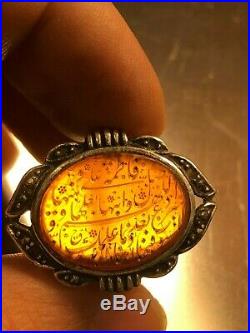 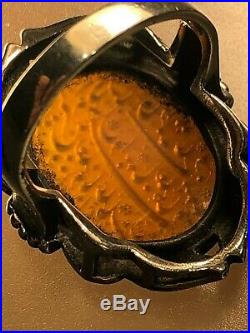 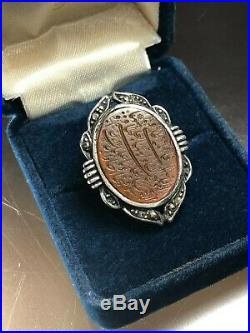 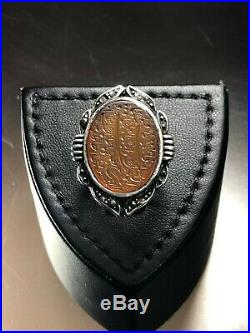 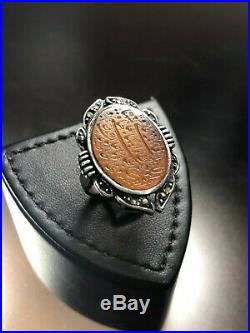 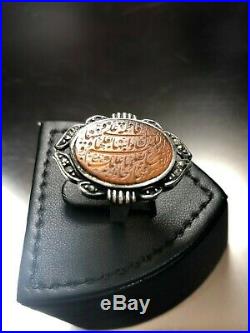 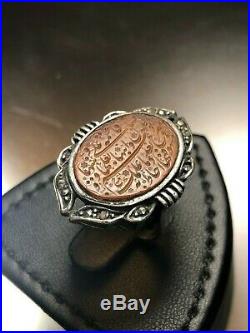 The prayer on the Agate stone is a very important and famous prayer to Fatima the Daughter of the Prophet Muhammad. As we all know she was the most important women in the history of Islam and very dear to the Prophet and God. In many verses of koran and Hadith, the Prophet insisted a huge respect and love to Fatima and told his people to respect and love her and that is his only wish. Because of this many scholars and people believe that if they pray to Fatima and ask her help, because of her status and position in the heart of the prophet and her spiritual position with God, She will protect them and God will keep them safe. Agate is also a very powerful Stone and it was advised by the Prophet to wear Agate or to keep with you in all times. That is why in Islamic Tradition, there are many Agate Stones engraved with different prayers for protection. The engraved Prayer on this Agate ring is. Allahumma Salle al Fatima wa abeeha wa baleha wa baneeha wa sirril mustaudaeh fiha beadada maa ahaata behi ilmu.

O Beloved Allah please shower Your blessings and prayers upon the illumined Fatima and her noble father and blessed husband and children, by the secret invested in her which is in Your knowledge alone. This is a prayer to Fatima and her family. Position of Fatimah in the Quran and the Sunna. Had been extolled and praised in the Book of Allah and in the Sunna of His prophet. Her Position in the Qur'an.

Many verses had been revealed in the Holy Qur'an praising the Ahlul Bayt a. (The family of the Prophet) at the head of whom Fatimah s. The Verse of Mawaddah (Koran Chapter 42, Verse 23). Say (O Muhammad, unto mankind): I do not ask of you any reward for it but love for my near relatives; and whoever earns good, we give him more of good therein; surely Allah is Forgiving, Grateful. In the Qur'an, Allah has imposed the love to the Ahlul Bayt a.

Narrators said that the near relatives mentioned in the verse referred to Ali, Fatimah, al-Hasan, and al-Husayn. There is no doubt that the Prophet (S) loved Fatimah s.

When he said, Fatimah is a part from me. Whoever harms her harms me. There are many more Verses about fatima and many more hadith, you can.