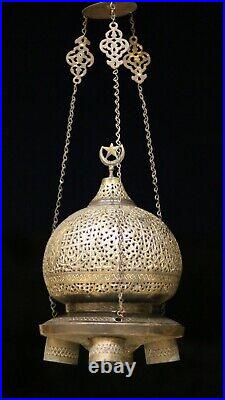 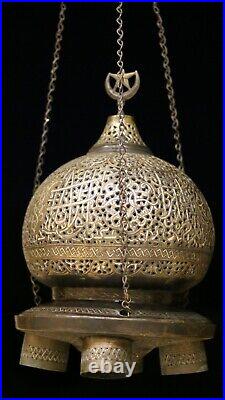 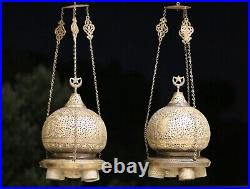 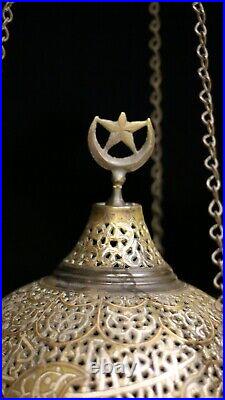 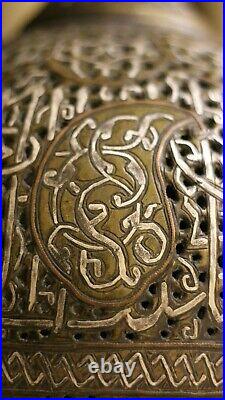 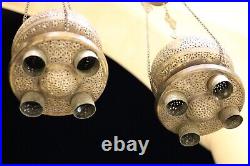 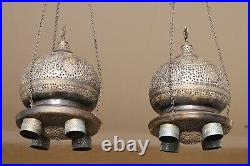 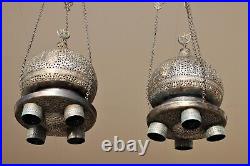 The lower and upper band decorated with openwork, and silver and copper inlaid arabesque motives. The bottom section pierced with scrolling foliage and adorned on an engraved background and pierced with tubular mounts for glass oil containers now lacking, since in the early 20th century the oil lamp had been converted to an electrical lamp, as most of the Mosque lamps. This fine, lantern has been engraved and inlaid with silver and copper strips in broad bands of Kufic script,, as well as bands of Islamic-inspired arabesques. The form of this or oil lamp is that which is classically associated with use in mosques. There are further cartouches containing lines of Arabic script within arabesque frames which complement the stunning motifs also seen throughout.

I love the style of calligraphy and the overall beauty and intricacy of the tray. Very high attention to detail which has resulted in a breathtakingly fine candlestick. In the 19th and early 20th Century, when such Items where made, was a time of revival of the old Mameluke style. Metal smiths and artists worked to resurrect the Mameluke style. Both in Europe and among the Muslims grew an interest in such craftsmanship.

The craftsmen inlaid softer metals such as silver and gold, into harder metals commonly copper and Brass but also into coarser metals. Such items exemplify the Mameluke revival period, taking ordinary metal and inlaying it to create an impressive and high-status item. Originally, a Mamluk was a soldier of slave origin.

Fine examples of inlaid metalwork were made during this time, and when the crafts was revived in Syria and Egypt during the nineteenth century the works were known as Mamluk Revival metalwork. Who are the Mamluks and where did they come from? The Mamluks are known as a class of people who served many empires, sultans, and caliphs in the old days as soldiers under their command, and then became their own authority later, and most of the Mamluks were from non-Muslim families of origin in the regions of Eastern Europe, the Caucasus, and Turkey. The recruitment of the Mamluks began in the ninth century by the Abbasid caliphs in Baghdad, where they were trained in the cavalry after embracing Islam to become soldiers and a force supporting the army under the direct command of the ruler.

The main reason behind the recruitment of the Mamluks is to avoid recruiting members of the tribes who are loyal and obedient to the leaders of their tribes, contrary to the order of the ruler. As for the Mamluks, they have no connection with the leaders of the army and nobles, and they were subordinate to the ruler since he was their guardian only.

He is Al-Mansur Seif Al-Din Qalawun Al-Alfi Al-Salihi, one of the most famous sultans of the Bahri Mamluks, and the head of a family that ruled Egypt and the Arab Mashreq for more than a century. In the state of Baibars, he was pledged allegiance to the Sultanate on the eleventh of Rajab in the year 678 AH, succeeding the just young king, Badr al-Din Salamish. After the death of al-Zahir Baybars in the year (676 AH = 1278 AD), two of his sons succeeded him in power. They are: Baraka Khan, and Badruddin Salamesh; But they did not last long in 2014; Because of their young age and inability to exercise the burdens of governance; The first was at the age of seventeen, and he was the first, and he was the first, and the deputy, and the deputy: the young man of the other, representing the authority, and unable to bear any of its consequences; So, Prince Qalawun assumed the guardianship of the young Sultan, and the proximity of the neighboring state; Even if he took matters into his own hands, and the ruler obeyed his will, he did what was inevitable, so the sultan deposed the child - who does not know why he was established over the sultanate? He declared himself the ruler of the country. Prince Seif al-Din Qalawun was one of the Bahri Mamluks. Prince Alaeddin Aq Sinqer bought him for a thousand dinars. When Prince Alaeddin died, he moved to the service of the righteous King Ayoub. Came into existence, and shone during the reign of Sultan Al-Zahir Baybars; who gave him his trust; For his wisdom and courage, and intermarriage; where Baraka Khan, son of Sultan Baybars, married the daughter of Qalawun; An affirmation of the spirit of love and friendship between them. And when the Sultanate of Barakat Khan worsened and failed to carry out the burdens of ruling due to his lightness, frivolity and bad behavior; The princes forced him to depose himself, and it was surprising, starting with the young sultan, and he looked forward to ruling in this khul, but the opportunity waited for the opportunity to rise to power without contesting it. Height : 43 cm - 16.92 inch. Diameter : 28 cm - 11 inch. Weight for the pair : 6790 gram - 14.96 Ib. We try to describe all items accurately and give good visual support through photographs and text. Please check all pictures; they are a major part of the description and best indication of condition. Please contact me if you interested for more picture. Our goal is to satisfy the customer.

This item is in the category "Antiques\Asian Antiques\Middle East". The seller is "rare-antique-shop" and is located in this country: JO. This item can be shipped worldwide.