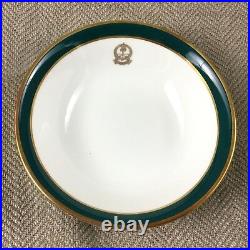 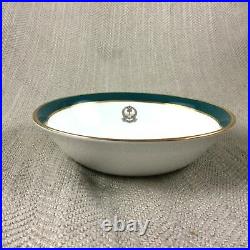 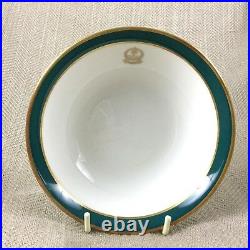 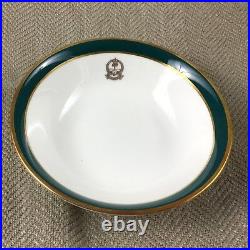 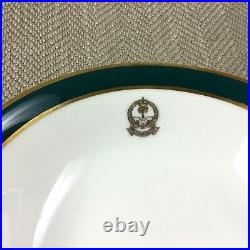 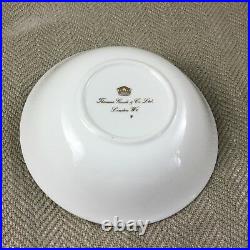 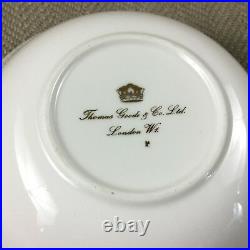 Rare Cereal Bowl made for King Abdullah's Royal Saudi Arabian National Guard Circa 2000's. King Abdullah commanded Saudi Arabian National Guard for three decades, from 1962 until 17 November 2010, when he appointed his son, Prince Mutaib bin Abdullah. Condition: Great overall condition no cracks or chips, minor rubs marks surface wear to the gilding and decoration. Very rare item, and highly collectible. Listing is for one, I have additional bowls available. 5.5" w x 1.5" h (inches). This is a bespoke piece created for the Royal Kingdom of Saudi Arabia, so not available for general sale.

Thomas Goode's experts were able to personalise this porcelain to exact specifications and incorporate the Royal Saudi National Guard Monogram onto each piece. Thomas Goode has a long standing relationship with Royal Families and Heads of State which still continues today. In recent times Thomas Goode provided bespoke china for Queen Elizabeth II and was commissioned in 1981 to create a dinner service as a gift to Their Royal Highnesses, the Prince and Princess of Wales on the occasion of their wedding. The Saudi Arabian National Guard Forces??????? Ani or SANG also known as the White Army is one of the three major branches of the Armed Forces of the Kingdom of Saudi Arabia.

The national guard is under the administrative control of the Ministry of the National Guard, instead of the Ministry of Defence. It differs from the regular Saudi army in being forged out of tribal elements loyal to the House of Saud and tasked with protecting the royal family. It reports directly to the King through the Minister of the National Guard and, unlike the army, navy and Air Force, is not under the control of the Ministry of Defense. The Guard's command structure and communication network are entirely separate from those of the Ministries of Defense and the Interior. Its personnel are drawn from tribes loyal to the king and the royal family, whose high-ranking members are always appointed its commander.

It has been described as an institution that "ties the tribes to the House of Saud" (by Sandra Mackey). The SANG was founded as the successor to the Ikhwan, the tribal army of King Abdulaziz. The Ikhwan had helped King Abdulaziz conquer the Arabian Peninsula and take it from the Hashimites in World War I. However, the Ikhwan committed many excesses and atrocities not just on The Hejazi army but on other Arabs as well. The various tribal groups of the Ikhwan also had a tendency to go off and do their own things and thus needed to be brought under a more centralised control.

The SANG acquired its moniker of the "White Army" during this period due to its wearing of traditional Arab dress instead of Western-style military uniforms. In 1954, the office of Jihad and Mujahidin was transformed into the modern National Guard. However, the Ikhwan committed many excesses and atrocities not just on The Hejazi army. This item is in the category "Antiques\Asian Antiques\Middle East".london" and is located in this country: GB.