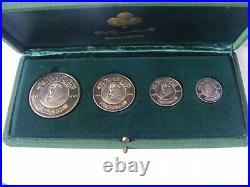 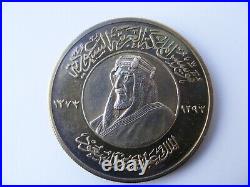 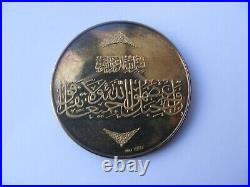 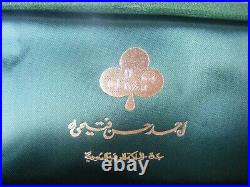 To give him his full name. He was born 15 January 1875 and died 9 November 1953, he was known in. He was the founder and first. Reigning from 23 September 1932 to his death in 1953. This is an extremely rare proof silver set of medals (they are not currency) issued in the year that ibn Saud died (1953). Proof' means that these were produced using very high standard polished dies resulting in the beautiful mirror like finish.

" A very rare set and the first we have noted ". If Heritage Auctions describes some as very rare it means that they have undertaken thorough research to establish their claim (full details & image of Heritage Auctions lot available on request). We have not seen another set in a box as ours is offered in the custom made box as shown. Please note that there is some rainbow cabinet toning on each medal as shown. Each one is hallmarked twice with'925' for sterling in an oval and another mark which consists of a star-shape with "121 MI" to the right.

These amazingly rare medals are housed in a custom made box which has recesses on the velvet base for the coins to sit and silk on the inside of the lid which has a gold stamped presentation inscription from "Hamad Hassan Fathy" and states it was presented in Jeddah, Saudi Arabia. The box was probably made in the 1980's to house the silver medals that were made in the 1950's.

Hamad Hassan Fathy was an internationally recognised Egyptian architect who won numerous prizes and awards during his lifetime. He also was awarded many contracts in Oman and Saudi as well as many countries around the world. In 1966, Fathy was appointed by the United Nations Organisation for Rural Development, to be advisor to the government of Saudi Arabia for rural housing.

The project was designed for the Ministry of Social Affairs. The idea of the project was to build two villages; one in Al Gammoum, Fatma Valley, and the other in Al-Dariya, near Riyadh. In 1974, Fathy received an important commission to design the Nassif house and the V. Residence, a large-scale palace in Jeddah, Saudi Arabia.

It was commissioned eight years after the Al Dariya project (1966), and represented another opportunity for Fathy to reinterpret the traditional architecture of Saudi Arabia. The owner, Dr Abd AI-Rahman Nassif, was among the few to initiate the revival of their own Arabic-Islamic heritage in architecture in Jeddah. Fathy designed & built the Al-Sabah house (1978) which was another opportunity to build in the Arab world and resulted from the invitation of his Highness Prince Nasser Al-Sabah and his wife Hussa, to build a house for them in the Fentas area, Kuwait. Viewing is strictly by appointment and a minimum of 48 hours notice is required as no items are stored on site.

All of our Islamic Art is guaranteed to be genuine and as described. We also further guarantee that our artefacts are legitimately sourced. TERMS & CONDITIONS OF SALE. Cheques only acceptable from UK Banks in sterling. Please DO NOT leave your questions until the last couple of hours of the listing!