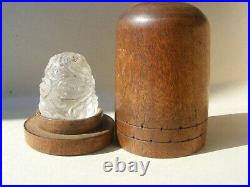 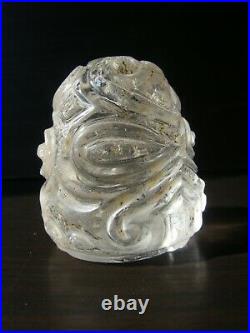 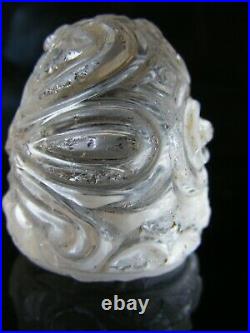 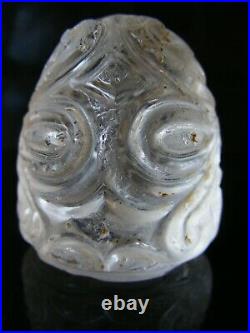 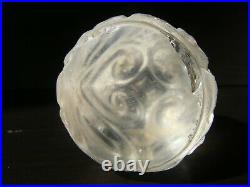 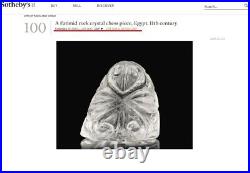 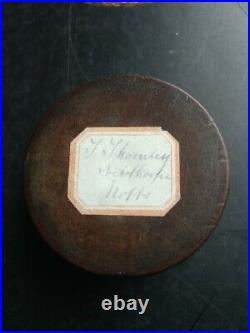 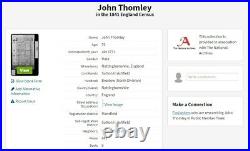 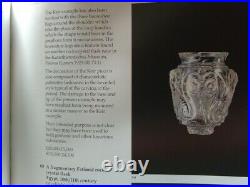 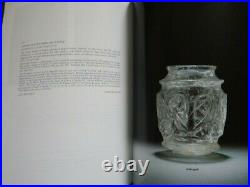 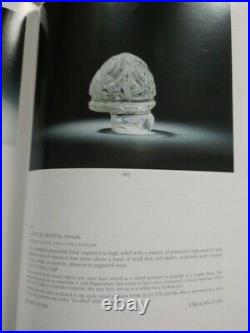 Extremely Rare Early Islamic Rock Crystal Chess piece c1000AD Egypt. Guaranteed Genuine around 1,000 years old Islamic rock crystal chess piece. We are delighted to offer this rare and early Islamic rock crystal deeply carved chess or gaming piece 9th-11th Century. Please note that this information in red is recent research that we have conducted on the paper collector's label on the bottom of the wooden case that was made to store this wonderful piece. This delightful and rare rock crystal chess piece is very tactile and is beautifully carved. The deeply carved bevelled cuts have a'u' shape and the overall appearance is very pleasing. Sibthorpe is a village in Nottinghamshire with a church mentioned in the Domesday Book(completed 1086). Around 1185 Robert de Sibthorpe gave the church to the Knights Templar. It passed to the Knights Hospitallers after 1312 when the Templars were disbanded. A few years later Thomas de Sibthorpe acquired it.

Parson of Beckingham, was an important man; he was a Parliamentary Clerk. A Justice of Assize as well as a Justice of the Peace and during the course of his early life he inherited, or acquired, portions of lands in Sibthorpe.

In 1326 he established a chantry there and expanded this into a college chantry over the years. There is one John Thomley listed in the 1841 Census and he is registered as being in Sutton in Ashfield on the day of the Census. In England, the Census takes place every ten years and people are registered on the Census according to where they slept the night before. Interestingly Sutton in Ashfield is only twenty five miles away from Sibthorpe so it is highly likely that the John Thomley in the 1841 Census was from Sibthorpe. Furthermore, the 1841 Census documents this John Thomley are being 70 years old which is a good age in that century as the average lifespan in the 19. Century was only 40 years an improvement from 17. Century when life expectancy was only 35 years at a time when the world average life was only 29-32 years (Wikipedia). Please read the rest of the description including information about how ancient Islamic rock crystal pieces ended up in Churches, Monasteries and Cathedrals across Europe. There is a horizontal stepped cut at the base and it has been suggested that a band of gold or silver would have been around this section to differentiate the two sides in a chess game (see Al Sabah Catalogue of Early Islamic Chess and Gaming Pieces by Deborah Freeman Fahid, London 2018).

Rock crystal has long been surrounded by mystery and myths with Bishops instructing crusaders to leave everything but rock crystal vessels during the medieval wars. This is how various rock crystal pieces ended up in Cathedrals throughout Europe in the Middle Ages (see Fahid, 2018).

Rock crystal was thought to have magical properties such as changing colour if the liquid poured into it was poisoned. Early Islamic rock crystal artefacts in Europe include. 9 chess pieces in the Treasury of the Basilica of San Marco in Venice. One ewer in the Church of Milhaguet (near Limoges). A box in the Musée de Cluny, decorated with a thirteenth-century Germanic mounting, which was once held in the Church of Moûtiers-en-Tarentaise. The Holy Thorn Reliquary in the Cathedral of Reims. Early Islamic Rock crystal chess pieces are documented in several European Churches. Rock crystal has long been surrounded by mystery and myths with Bishops instructing crusaders to leave everything behind except rock crystal vessels during the medieval wars. Chess is known as the Game of Kings as who else had the time and felt secure enough to play such an absorbing game in ancient times.

Ancient chess and gaming pieces were made for the elite in society and the materials, amount of carving involved reflected this. Early Islamic chess pieces have a track record for attracting record amounts when they come up for sale. The Sotheby's example is very similar apart from the additional design elements such as the vertical hatching which would mark it out as the'King'. This piece has been in the same private collection for several decades, safely stored in a display cabinet. It is housed in a purpose made domed wooden box that is over 200 years old with a collector's label on the underside from the same period.

The name on the label is from a collector who lived in England and who is recorded in the 1771 population census (full details on request). This piece stands just 4cm in height but is a true heavyweight among ancient chess pieces. There is some wear such as small chips around the piece as shown on the images above. This beautifully carved piece also has some minor inclusions in the crystal that can be seen from the underside. However, this piece is around 95% clear and has no internal fissures which are often found in this type of carved rock crystal.

From a Private North of England Collection. Viewing is strictly by appointment and a minimum of 48 hours notice is required as no items are stored on site. All of our Islamic Art is guaranteed to be genuine and as described. We also further guarantee that our artefacts are legitimately sourced. TERMS & CONDITIONS OF SALE.

Cheques only acceptable from UK Banks in sterling. Please DO NOT leave your questions until the last couple of hours of the listing! All dimensions and measurements are approximate. Otherwise, do not expect an item to be covered for any loss or damage.

The item "Extremely Rare Early Islamic Rock Crystal Chess piece c1000AD Egypt Low Reserve" is in sale since Friday, July 30, 2021. This item is in the category "Antiques\Asian/Oriental Antiques\Islamic/Middle Eastern". The seller is "islamiqueantiques_dot_com" and is located in Bradford. This item can be shipped worldwide.