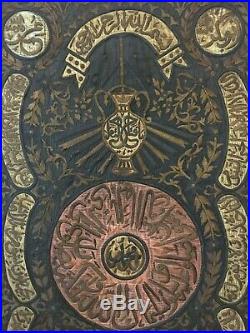 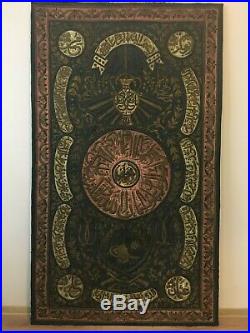 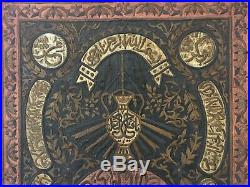 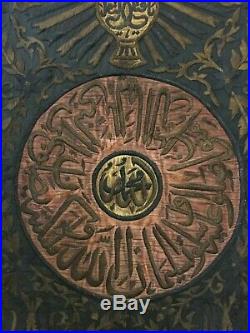 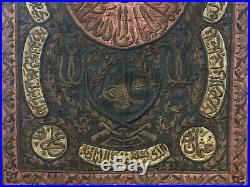 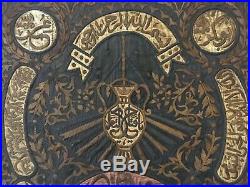 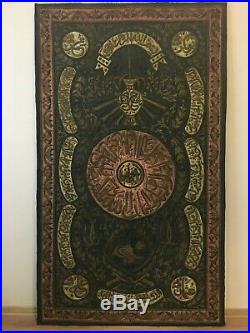 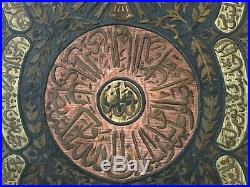 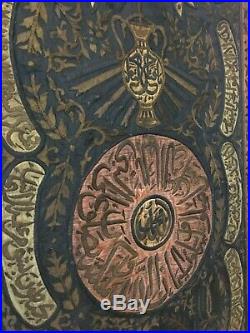 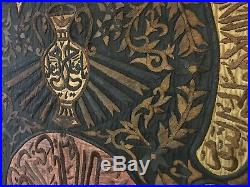 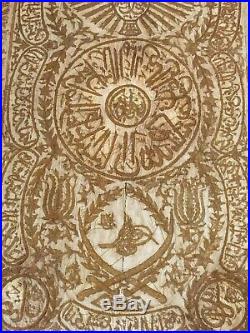 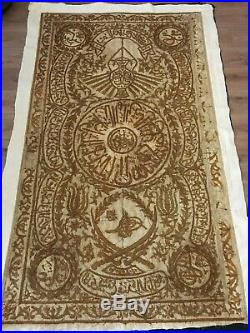 Extremely Rare, Large Antique Islamic Metal Embriodary Textile from 19th Century Ottoman Dynasty Sultan Abdul Hamid II with his Signature Tugra In the Middle Down of the Curtain. This is a remarkable handmade and hand metal embroidery heavy curtain for the Holy Mosque in Medinah ordered by the Ottoman Sultan.

These amazing Islamic Curtains are very import artifacts of Islamic Heritage and Art in the Ottoman Dynasty. For most of the Ottoman History, they ruled over most of Arabia and the Ottoman Sultans were also known as the Khademain Haramayn Sharifayn or the Servants of the Two Holy Mosques (Makkah & Madinah) The title of the Islamic Khalifa and the King. Although the Ottoman Sultans where the Khalifa of the Islamic World at their time and also King of Makkah & Madinah, none of them ever visited these holy cities and could not do Haj or Omra which is very important in Islam, because they were afraid of enemies and war in their absence.

Therefore for showing their love and respect for the holy mosques of Muslims every year, they ordered many lavish and extraordinary curtains and items with beautiful calligraphy and Islamic designs for the decoration of the two holy mosques and after a year was completed all these items would come back to them for their blessings and special spiritual energies they had, being placed in the holiest mosques of Islam for a year. This particular wall hanging curtain is extremely beautiful with super fine details and calligraphy.

It has the Names of the Four Khalifas known as The Four Rightly Guided Caliphs; Abu Bakr, Omar, Uthman & Ali on four sides of the curtain. In the Middle Top, you can see the word Ya Fattah , written two times in a mirror image. Fattah is one of the most important and used names of the 99 names of God which is used for prayers by Muslims. The word means; The Opener, The Revealer, The Granter of Success and that is why it is used when people asking God for any help and He as the Granter of success and everything would give it. Above that and on top of the curtain you can see. "In the name of God, the Most Gracious, the Most Merciful". The Ayat al Kursi as a special prayer for protection and one of the most famous and important verses of Koran is written on all sides of this curtain. Ayat al Kursi or the Verse of Throne is Verse 255 of Surah Baqara (Chapter 2). There is no deity but Him, the Alive, the Eternal. Neither slumber nor sleep overtaketh Him. Unto Him belongeth whatsoever is in the heavens and whatsoever is in the earth. Who could intercede in His presence without His permission?

He knoweth that which is in front of them and that which is behind them, while they encompass nothing of His knowledge except what He wills. His throne includes the heavens and the earth, and He is never weary of preserving them.

He is the Sublime, the Tremendous. Right in the center of the curtain, there is the Name of Prophet Muhammad and The Name of God, Allah. Around them in a bigger circle, there is another verse from the Quran Chapter 33 Surah Al Ahzab, Aya (Verse 56). INN ALLAHA WA MALAIKATAHU YU SALLUNA ALAN NABI YA AYYUHAL LAZEENA AMANU SALLU ALAIHI WA SALLIMU TASLIMA.

Verily, Allah and His Angels send blessings on the Prophet: O you who believe! Send blessings on him, and salute him with a worthy salutation. In the middle down of the Curtain, you can see the Signature Tugra of the Ottoman Sultan, Abdul Hamid II who became the 34th Sultan of the Ottoman Dynasty in 1876 AD. This amazing curtain is very heavy because of the Metal Embroidery and it was framed for many years in our family house in the Middle East, but after we moved to the United States we had to remove it from the frame for easy and cheaper transportation. You can see at the back of the curtain on all sides a very thick 100% Heavy Duty Cotton Fabric was attached to the curtain's sides to avoid any damage to the main fabric of the curtain while fixing to the frame.

This was done by an expert in Islamic Art Conservation in the Middle East to avoid any damage to the material and it is still attached to the sides of the textile for re-framing. If you look at the back of the curtain you can see the amount of work and effort in the creation of this masterpiece. The work is entirely handmade with master craftsmanship. There are small signs of repair on the black fabric of the base in a few areas. The item "Huge Antique Islamic Holy Medina Curtain Metal Embroidery Ottoman Dynasty Signed" is in sale since Tuesday, November 12, 2019.

This item is in the category "Antiques\Asian Antiques\Middle East". The seller is "ethics-antiques" and is located in Rocklin, California.