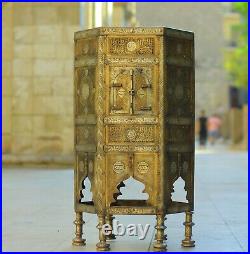 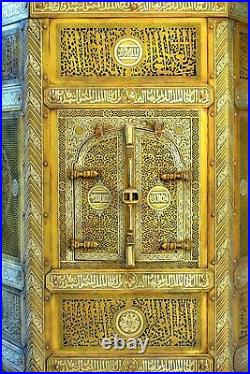 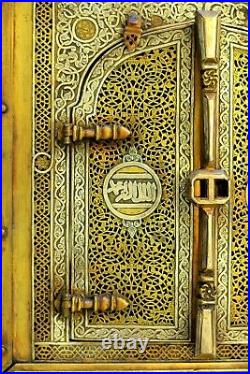 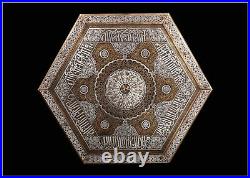 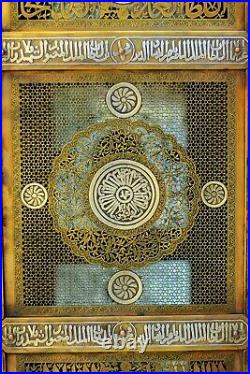 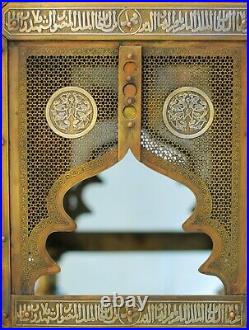 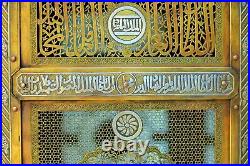 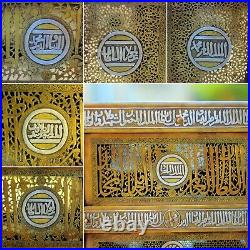 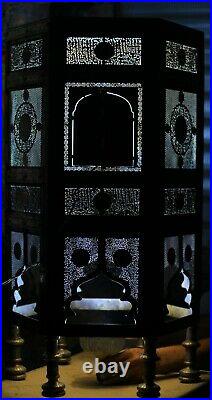 This piece assumes the shape of a hexagonal (six-sided) pedestal upon which dinner trays would be placed; it is therefore known as a dinner stand. Its top surface, which is also hexagonal in shape, has a central circular decoration comprising a radiating inscription in a plaited kufic script. The radiating form of the inscription increases its decorative impact as it appears to simulate the rays of the sun coming from a central medallion, in which the artist has inscribed the name of Sultan al-Nasir Hasan ibn al-Nasir Muhammad ibn Qalawun, for whom this table was probably made. Framing the surface of this piece, is an inscription in Mamluk thuluth script which includes the name of the sultan and a number of his titles, it reads:'Glory to our lord the Sultan al-Malik al-Nasir al-'Alam, al-'Adil, al-Mujahid, al-Murabit, al-Muthaghir, al-Mu'ayyad, al-Mansur, the Sultan of Islam and the Muslims, the Destroyer of Apostates and Infidels, the Reviver of Justice to all, the Protector of the oppressed against the oppressors, the Protector of the Muslim community, the Protector of worldly and spiritual matters, ibn al-Sultan al-Malik al-Mansur Qalawun Al-Salihi'. And surrounding these inscriptions along the interior are a series of lobed semi-circles decorated with flying ducks that are distinguished by their vitality and movement. Each of the six sides of the pedestal's surfaces is comprised of four decorated panels arranged vertically one on top of the other. In the centre of one of these panels is a small door with two arched leafs which open to reveal an internal shelf. The panels are ornamented with openwork arabesque designs, composed of intertwining vegetal leaves and stems, lotus blossoms, and epigraphic inscriptions in thuluth script, on a background of openwork decorative motifs. The table has six short'supports', posts that rest on the legs. A series of inscriptions are recorded on them, which indicate the name of the craftsman and his titles the English translation of which reads:'Made by the poor slave hopeful of his God's forgiveness, known as the son of the teacher professor Muhammad, son Sunqur al Baghdadi al-Sanqari, in the year AH in the days of our lord al-Malik al-Nasir, glory to his triumph'. Such objects, although used extensively as stands for food trays, were also used to carry the Qur'an or torches at night in mosques or palaces, as well as to carry drinks, vases and incense burners.

It is possible that this pedestal, which belonged to al-Nasir Muhammad, had been used to carry these types of items in his private palace or in his madrasa which was built on the street of the coppersmiths (Shari' Nahhsin) in Cairo. The dinner stand is one of the most valuable acquisitions in of the of Islamic Art in Cairo for it demonstrates the prolific production of metalwork in the Mamluk period. The importance of this particular piece stems from its having been crafted specifically for Sultan al-Nasir Muhammad ibn Qalawun, not to mention the fact that it contains the name of the craftsman who made it along. Its exceptional quality is magnified when its splendour and size are considered. Please contact me and request additional photos.

The piece is of very high quality and very accurate. You need more than 50 photos to describe its quality and detail. This is one of the best pieces ever made in the history of Islamic art. It comes as an exact copy of the one in the Museum of Islamic Art in Cairo.

It is believed that it could take three years to make this piece. Diameter from above :- 48 cm. The item "ISLAMIC MAMLUK ARABIC CAIROWARE KURSI SILVER & gold INLAID BRASS OTTOMAN TABLE" is in sale since Wednesday, October 27, 2021. This item is in the category "Antiques\Asian Antiques\Middle East". The seller is "sulaymane-aziz" and is located in Cairo.