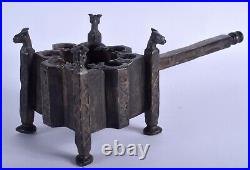 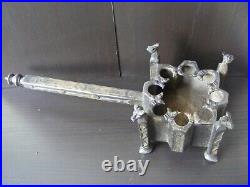 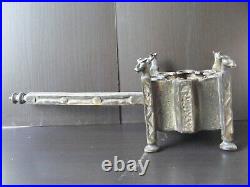 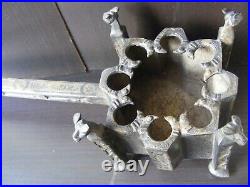 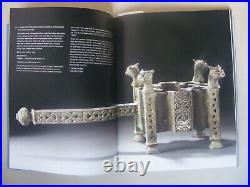 Magnificent c1,000 year old LARGE Long handled censer bakhoor burner. This is an absolutely amazing ancient work of Islamic Art and was made for someone of high rank or status around 1,000 years ago.

Incense has always had a position of significance and importance in the Islamic tradition. Arabia was on the ancient Silk Route from the Far East through which incense, spices and herbs were traded.

Incense or'bakhoor' burners of this style with long handles are documented in the 9. Centuries after which they largely went out of fashion.

Both the British Museum example and the Sotheby's example have four lion head knops (or terminals) just as ours has. These lion heads with large ears probably represent the caracal which is a large wild cat that lived in the region that these were all made: Khorasan, an area that is widely documented as the centre of Islamic metalwork for several centuries until the invasion of the Mongol hordes.

Caracals were common is early Islamic art work and in fact there is a 850mm tall incense burner in the form of a caracal in the Metropolitan Museum (USA). There are also several other similarities between our incense burner, the Sotheby's example and the one in the British Museum. Each has an'octofoil' design that forms the rim of the main body of the burner. An'octofoil' is the eight sided designed opening or rim and was a common design in 12. Century Islamic Art (see also octofoil body of an incense burner made of stone in the British Museum). The octofoil design element gives the appearance of a flower head which is a clever use of the shape as this is an incense burner and may have been used to burn rosewood or petals. Each has bird's heads along the top edge of the octofoil section. Birds were also a very common design element of early Islamic Art and there is a very early 9. Century Islamic ewer in the shape of a bird in Damascus.

None of these incense burners have any silver inlay which was becoming fashionable in the later 12. This helps to date these to the earlier 12. Century making them around 900 years old.

There are small panels of Kufic benedictory inscriptions on the handles of each one. Under each lion head is a squared column that ends in hoof-shape feet.

Our example and the Sotheby's example both have a large knop at the end of the handle which would have been added as a'flourish' or finishing touch. This type of large, early, long handled Islamic incense burner does not come onto the market very often so this is a rare opportunity to acquire one in very good condition.

Although it is documented that this type of long handled incense burner was used in masjids, the lion head terminals point to use in a palace or a wealthy merchants home. You have to keep in mind that the streets of town and cities had basic sewage systems and when a visitor came off the street they might not carry an acceptable fragrance depending on the heat outside and the length of the journey. A servant would place a piece of hot coal in the centre of the burner and add grated or small pieces of incense just as we do with modern incense burners. The long, hollow handle would ensure that the person holding the censer did not burn their hand.

The incense would be wafted around the visitor to get rid of the smells of the street. This incense burner can be used today making it a beautiful work of art and a functional piece.

It would make an amazing conversation piece or a shop display. This is one of the larger of this rare type of incense burner measuring a magnificent 410mm in length x 150mm in height. Please note that this ancient Islamic artefact has been carefully and professionally conserved by a previous owner which means that the surface is in good, clean and stable condition. From a Private London collection formed in the 1960's. Viewing is strictly by appointment and a minimum of 48 hours notice is required as no items are stored on site.

All of our Islamic Art is guaranteed to be genuine and as described. We also further guarantee that our artefacts are legitimately sourced. TERMS & CONDITIONS OF SALE.

Cheques only acceptable from UK Banks in sterling. Please DO NOT leave your questions until the last couple of hours of the listing! All dimensions and measurements are approximate.

Otherwise, do not expect an item to be covered for any loss or damage. This item is in the category "Antiques\Asian/Oriental Antiques\Islamic/Middle Eastern". The seller is "islamiqueantiques" and is located in this country: GB. This item can be shipped worldwide.