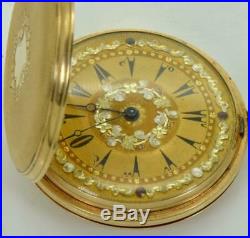 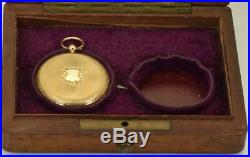 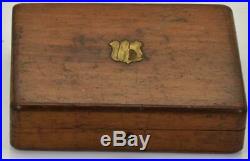 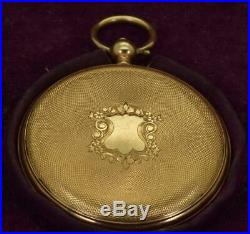 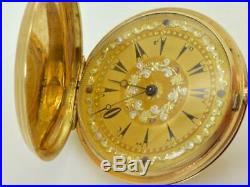 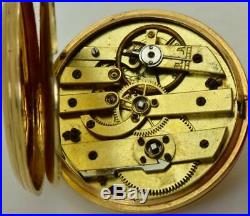 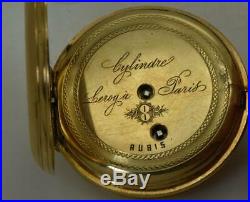 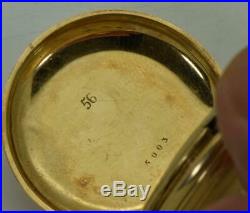 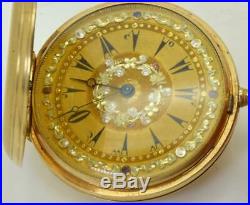 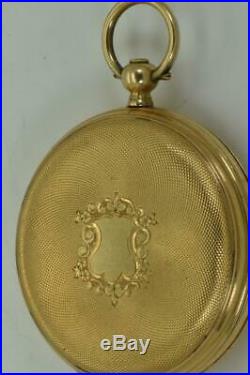 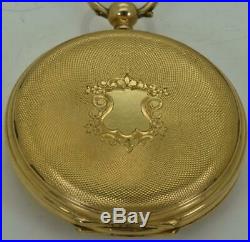 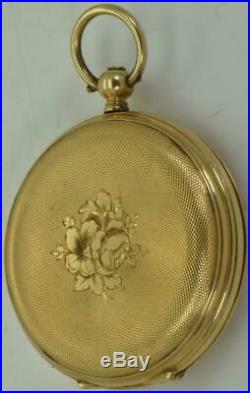 The watch comes with a matching key and with the original luxury wooden presentation case. As the leader in his field his clientele included the cream of French society, not least King Louis XV and members of his court notably the Prince and Princess, the duc dOrléans and Cardinal de Fleury.

As a result of Le Roys friendship with the British clockmaker, Henry Sully and his senior colleague, William Blakey, a number of high quality English and Dutch makers were introduced into Parisian workshops. This as well as Le Roys own advances in the quest to improve accurate time measurement actively encouraged renewed life into the flagging Parisian trade. Born in Tours, he trained under his father, Pierre Le Roy and by the age of 13 had already made his own clock. In 1699 Julien Le Roy moved to Paris, where he was apprenticed under Le Bon; it is said that while there he succeeded in making and completing a watch in only eight days. Received as a maître-horloger in 1713, he later became a juré of his guild; he also became a member and later a director of the Société des Arts. But his most important appointment began in 1739 when he was made Horloger Ordinaire du Roi to Louis XV. He was given lodgings in the Louvre though he never occupied them.

Instead he installed his son, Pierre (1717-85) and continued to operate his own business from rue de Harlay, where he remained for the rest of his life. Le Roy created exceedingly fine clocks for the King including one in a Boulle case for the Château de Fontainebleau. In 1727 he made a repeating cartel as well as two repeating watches which are the first to have been made so that His Majesty can remove the dials Himself to see the uncovered mechanism. The following year Le Roy applied the same principle to his repeating mantle clocks.

Le Roys innovations and improvements were substantial, notably his perfection of monumental clocks that showed mean and true time, of which his model at Hôtel des Missions Etrangères was exemplary. Le Roy also researched equation movements showing and chiming true time and advanced pull repeat mechanisms. He also resolved many problems to do with watchmaking; by taking the best and discarding the least satisfactory elements from both French and English clockmaking he ensured that watches were subsequently easier to construct and simpler to maintain. One aspect was his adoption of George Grahams cylinder, which eventually resulted in reducing the watchs thickness. George Graham was among his many admirers, who on inspecting Le Roys work once noted I would like to be younger so as to make watches like this. Due to his unrivalled success, Le Roy was not limited by commercial constraints; for instance he nearly always made high quality watches and clocks in pairs so that the case and decoration perfectly matched.

He generally chose the cases himself, which were provided by the very finest makers of his day such as Nicolas Le Sueur, André-Charles Boulle father and son, the Caffieris, Charles Cressent, Le Cocq, Jean-Joseph de Saint-Germain and Robert Osmond as well as Balthazar Lieutaud, Antoine Foullet and others. Antoine-Nicolas Martinière, Nicolas Julien and possibly Elie Barbezat generally made his dials. Le Roys work can be found among the worlds greatest collections including the Musées du Louvre, Cognacq-Jay, Jacquemart-André and Petit Palais in Paris.

Other examples are housed at Château de Versailles, at the Victoria and Albert Museum and Guildhall in London and at Waddesdon Manor, Buckinghamshire. The Musée dHorlogerie, La Chaux-de-Fonds and Museum der Zeitmessung Bayer, Zurich as well as the Rijksmuseum, Amsterdam and Musées Royaux dArt et dHistoire, Brussels all house his work. As do the Museum für Kunsthandwerck, Dresden, the National Museum Stockholm and Musea Nacional de Arte Antigua, Lisbon.

Works by Le Roy in American collections include the J. Getty Museum, California; the Walters Art Gallery, Baltimore and the Detroit Institute of Art. Like their father, Le Roys four sons all excelled in their field, one became a physician, one a chemist and another an architect and antiquarian. His eldest son, Pierre Le Roy was a brilliant clockmaker in his own right and one of the first to make a successful marine timekeeper. NOTE:PLEASE OBSERVE CAREFULLY THE PHOTOS!

IT IS A SIGNIFICANT PART OF THE DESCRIPTION. Every potencial defect which is shown in the photos, but not mention in the description, will be considered for described.

All the photos shoot by professional Nikon 105 Macro lens under 40x diopter magnification, so you can explore even the smallest detail like under microscope! Auctiva offers Free Image Hosting and Editing. The item "MUSEUM antique LeRoy a Paris 14k gold pocket watch for Ottoman Sultan's Court" is in sale since Saturday, March 7, 2020. This item is in the category "Jewelry & Watches\Watches, Parts & Accessories\Watches\Pocket Watches".

The seller is "riaerica2000" and is located in Sofia. This item can be shipped worldwide.