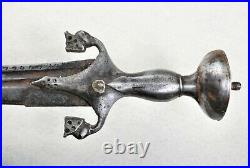 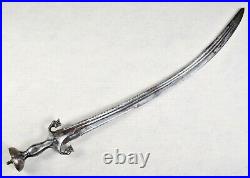 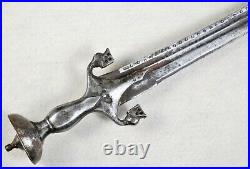 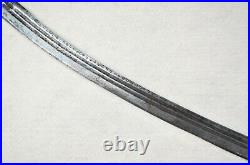 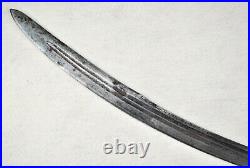 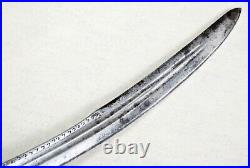 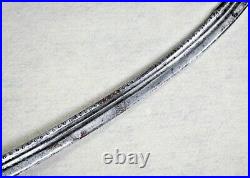 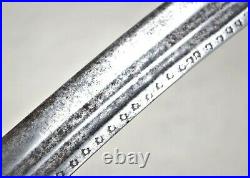 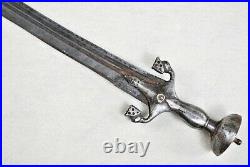 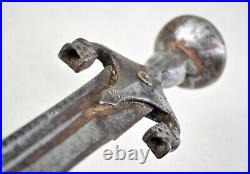 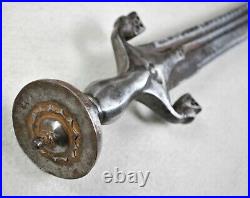 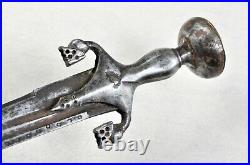 This is an old, Pulwar sword (not Tulwar) with a fine forged pattern to the blade. (not the over-exaggerated Damascus patterns on some newer swords) In the closeup pictures of the blade there is contrast between the grey metal and the darker metal that makes it look pitted, but the blade is actually fairly smooth. In the fullers, there are a few spots of light pitting or rust. The overall length is about 34-3/4 (880 mm).

Although the blade has not been sharpened in a long time (as seen by the patina along the edge), the edge is still very sharp. There are no nicks but there is a tiny flat on the edge about 10 from the tip. (hard to see but you can feel it). A nice untouched blade with a sharp edge and no nicks, likely from the 1700's or 1800s (possibly earlier). The steel handle has a nice dark grey patina. The handle fits tight to the hand or is made for a slightly smaller hand. The original pitch that holds the blade in the handle, has loosened causing play in the handle. The pommel is still very securely attached to the grip. The quillion are pierced with some nice details. This is not a parade piece, this sword is a high quality sword that can hold its own in battle. Worth either restoring or keeping it as is to help display its history.

Borrowing features from the swords of neighboring lands, the pulwar may be described as an Afghan version of the Indian. Pulwar blades tend to be more elaborately. Than those of the talwar or tulwar. Some pulwar hilts were fitted to.

This item is in the category "Collectibles\Militaria\1784-1860\Original Period Items". The seller is "vargas69" and is located in Saint John, Indiana. This item can be shipped worldwide.