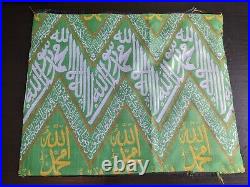 Rare style of Kiswa from the prophetic chamber early 1900s , ottoman design and calligraphy through out. Vintage ottoman Patterns, the inscriptions "Allah & Muhammad" repeated in Arabic on alternating vertical lines. Then the shahdah inscribed "la illaha illallah Muhammad rasul Allah" (There is no deity except Allah and Muhammad is his messenger). Cut from a bigger textile.

The item "Rare Prophet Muhammad Antique Kiswa Grave Cover Early 20th Century (Certificate)" is in sale since Monday, April 5, 2021. This item is in the category "Collectables\Religion & Spirituality\Islam". The seller is "pilsko" and is located in London. This item can be shipped worldwide.