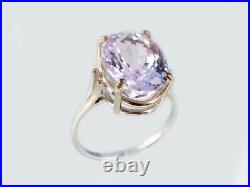 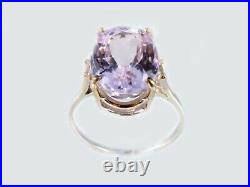 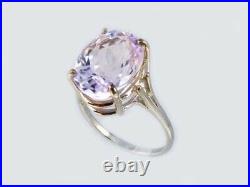 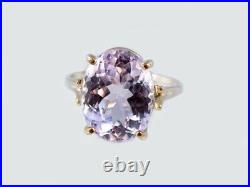 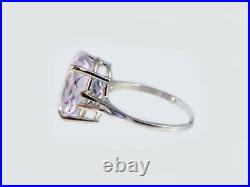 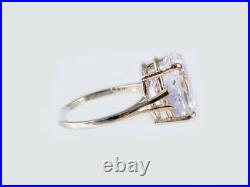 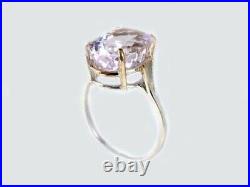 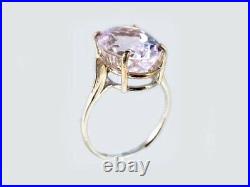 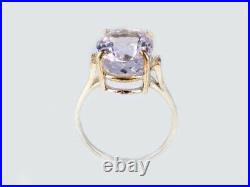 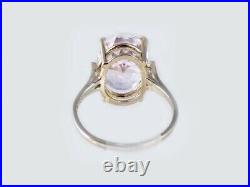 NOTE : If you would like only the gemstone, and not the setting, we can dismount the gemstone and offer you the gemstone without the setting. Just let us know, and yes, we'll discount the price by the cost of the setting. DETAIL: Kunzite was traditionally worn as a talisman which was believed to bring good luck to the wearer. Its soft pastel colors also came to symbolize purity.

It was known in Central Asia and in Eastern Europe as early as the sixteenth century from sources in Afghanistan and Russia. It was believed by Russian jewelers to be a variety of pink amethyst. There are also references to it in ancient Hindu texts, where it was referenced as having been produced in what is present-day Pakistan. Kunzite displays two unusual characteristics; "phosphorescence" where Kunzite, in this respect similar to diamonds, is observed to glow in a darkened room after it has been exposed to the sun's ultra-violet rays and "Pleochroism", showing two different colors when viewed from different directions. Celebrating this historical legacy, we offer this beautiful, handcrafted antique pink kunzite Newly "discovered" in America in the twentieth century, violet to pink shades of kunzite have become enormously popular.

It is a rare and gorgeous gemstone which typically can shift colors between pink-violet, and (depending on how it is cut) on occasion, green. Depending on the cut, it can also possess incredible sparkle and brilliance. This particular specimen originated in Afghanistan, and was hand crafted and faceted by a 19th century Russian artisan, part of an heritage renown for the production of the elaborate gemstones and jewelry of the Czars of Medieval, Renaissance, and Victorian Russia. As you can see in these photo enlargements, the gemstone is absolutely eye clean. Even in the accompanying photo enlargements it is not easy to discern the minute blemishes that the gemstone possesses. It may be conservatively described as "eye clean", though it is not absolutely flawless (absolutely flawless gemstones are very rare in nature, they typically turn out to be synthetic "lab" gems). The setting is of contemporary origin. It is a high quality setting manufactured by one of the USA's leading semi-custom mount producers.

It is constructed of solid sterling silver. We do have the ability to have the ring sent out for resizing if requested. Additionally, if preferred, this mounting (as well as a wide variety of ring settings in other appealing styles) are also available in sterling silver. As might be expected under magnification the gemstone shows the unmistakable, hallmark characteristics of having been hand crafted.

The coarseness of the antique, handcrafted finish is considered desirable to most gemstone aficionados, and is not considered a detriment, or detract from the value of a gemstone. These characteristics are not only expected of hand-finished gemstones, many believe that such antique hand-crafted gemstones possess much greater character and appeal than today's mass-produced, laser-cut gemstones. Unlike today's computer controlled machine produced gemstones that approach flawlessness in a perfect finish, the cut and finish of an antique, handcrafted gemstone such as this is the legacy of an artisan who lived two centuries ago. Handcrafted though it may be this remarkable gemstone has great luster and sparkle, and to the eye is completely transparent, but one cannot say with absolute certainty that it is absolutely flawless.

True, any blemishes it possesses are not visible to the naked eye, and even in the accompanying photo enlargements here there are no discernible flaws. However we hesitate to use the word "flawless", as sooner or later blemishes will show up at higher levels of magnification with almost every natural gemstone. An absolutely flawless gemstone is very rare in nature (and usually turns out to be synthetic).

However to use trade jargon the gemstone can be characterized as "eye clean". To the eye it is indeed flawless, nonetheless close examination with a jeweler's loupe will however reveal occasional slight irregularities in the faceting and finish. Naturally these characteristics are expected of hand-finished antique gemstones.

It is precisely for these reasons antique gemstones must be appreciated as antiques first, gemstones second. The relatively superlative quality of contemporary gemstones routinely mined from deep beneath the earth's surface today were simply not accessible two centuries ago, or at least, only rarely so.

However for most, the unique nature and character of these antique gemstones more than makes up for any minute blemishes found within the gemstones, as well as the cutting irregularities common to handcrafted gemstones, all of which are by and large (if at all) are only visible under magnification. HISTORY OF KUNZITE: Kunzite is an unusual and rare gemstone. It is the pink or violet-colored variety of the spodumene family, cousin to hiddenite (green spodumene) and triphane (yellow or colorless spodumene). Kunzite was first "discovered" (officially at least, as reported in Western sources) in America at the Pala Chief Mine near San Diego, California.

The "newly discovered" gemstone was named after Tiffany's chief gemologist George Frederick Kunz, who was the first to give a comprehensive (and published) description of the gemstone shortly after the turn of the twentieth century. Another spodumene variety "discovered" in America few decades prior to kunzite was named "hiddenite", after A.

Hidden, who was one of the original mine owners wherein this spodumene variety was found (in North Carolina). By whatever name, kunzite, hiddenite, and triphane are all still best known to geologists as "spodumene" first described in literature in 1800 A. The name spodumene is derived from the Greek spodumenos, which meant "burnt to ashes", in reference to spodumene's commonly occurring light gray color. Spodumene is a major source of lithium, trace amounts of which is what gives it its pink color; violet undertones are created by traces of manganese.

Lithium has a great variety of uses including in the manufacture of lubricants, ceramics, batteries, welding supplies, experimental fuels and in anti-depressant drugs. Kunzite displays two unusual characteristics; "phosphorescence" whereby kunzite, in this respect similar to diamond, is observed to glow in a darkened room after it has been exposed to the sun's ultra-violet rays; and "pleochroism", showing two different colors when viewed from different directions.

Kunzite is actually trichroic, meaning it can appear up to three different colors, depending on the angle from which it is viewed. It can appear very strongly violet from one angle, light purple/violet/pink from another, and pale green or colorless from a third angle of view.

Kunzite commonly shows violet, pink, yellow or green hues depending upon the orientation of the cut gemstone. Transparent spodumenes of pink to violet color (kunzite) and yellowish-green to medium deep green (hiddenite) are used as gemstones. Kunzite is particularly noteworthy for its feminine and alluring hues which range between pastel pinks and violets to intense, almost "neon" hues. Kunzite is presently mined in the United States, Canada, Mexico, Brazil, Afghanistan, Pakistan, Burma, Ceylon, Finland, Sweden, Russia, Australia, Mozambique, Nigeria and Madagascar. It is often found in association with other two semi-precious pink gemstones; morganite and pink tourmaline.

The largest known faceted kunzite gemstones include a 614 carat pear at the University of Delaware's mineral museum, and an 880 carat gemstone on display in the Smithsonian Institution's collection in Washington D. Among the jewelry from the Estate of Jacqueline Kennedy Onassis was a ring with a 47 carat cushion cut kunzite stone surrounded by 20 round diamonds set in 18k gold. Kennedy as a Christmas gift for his wife in 1963. The ring was never "presented" by the President to his wife, as he was assassinated the month prior to Christmas (in November 1963). Throughout the history of the ancient world, gemstones were believed capable of curing illness, possessed of valuable metaphysical properties, and to provide protection. Found in Egypt dated 1500 B. The "Papyrus Ebers" offered one of most complete therapeutic manuscripts containing prescriptions using gemstones and minerals. Gemstones were not only valued for their medicinal and protective properties, but also for educational and spiritual enhancement. In the ancient world kunzite was traditionally worn as a talisman which was believed to bring good luck to the wearer.

New age shamans and metaphysical practitioners regard it as a symbol of new life, specifically pregnancy, and believe that it also opens the path to spirituality for new wearers, revealing the inner soul and the "purpose" of their incarnation. It is also believed to help the wearer understand and interact better with others, to help heal "broken hearts" (and is considered especially beneficial for those who have experienced a failed relationship or marriage), to relieve stress and anger, dissolve negativity, and to bring love, peace and harmony. It is also said to be useful for increasing the wearer's inner strength and sense of self worth, for removing emotional blockages originating in past i. It is also said to stimulate sensitivity and sensuality.

It is sometimes referred to as a "stone of balance", offering its wearer emotional calmness, security, and maturity. Kunzite is believed to help strengthen the circulatory system, and to be helpful in the treatment of lung disorders, psychiatric disorders, chemical dependencies and addictions, and depression. We package as well as anyone in the business, with lots of protective padding and containers.

Please ask for a rate quotation. ABOUT US : Prior to our retirement we used to travel to Europe and Central Asia several times a year. Most of the items we offer came from acquisitions we made in Eastern Europe, India, and from the Levant (Eastern Mediterranean/Near East) during these years from various institutions and dealers. Petersburg, as well as some other worthy institutions in Europe and Asia connected with Anthropology and Archaeology. Though we have a collection of ancient coins numbering in the tens of thousands, our primary interests are ancient jewelry and gemstones. Prior to our retirement we traveled to Russia every year seeking antique gemstones and jewelry from one of the globe's most prolific gemstone producing and cutting centers, the area between Chelyabinsk and Yekaterinburg, Russia.

From all corners of Siberia, as well as from India, Ceylon, Burma and Siam, gemstones have for centuries gone to Yekaterinburg where they have been cut and incorporated into the fabulous jewelry for which the Czars and the royal families of Europe were famous for. My wife grew up and received a university education in the Southern Urals of Russia, just a few hours away from the mountains of Siberia, where alexandrite, diamond, emerald, sapphire, chrysoberyl, topaz, demantoid garnet, and many other rare and precious gemstones are produced. Though perhaps difficult to find in the USA, antique gemstones are commonly unmounted from old, broken settings - the gold reused - the gemstones recut and reset.

Before these gorgeous antique gemstones are recut, we try to acquire the best of them in their original, antique, hand-finished state - most of them centuries old. We believe that the work created by these long-gone master artisans is worth protecting and preserving rather than destroying this heritage of antique gemstones by recutting the original work out of existence. That by preserving their work, in a sense, we are preserving their lives and the legacy they left for modern times. Far better to appreciate their craft than to destroy it with modern cutting.

Not everyone agrees - fully 95% or more of the antique gemstones which come into these marketplaces are recut, and the heritage of the past lost. This item is in the category "Jewelry & Watches\Fine Jewelry\Rings".

The seller is "ancientgifts" and is located in this country: US. This item can be shipped worldwide.