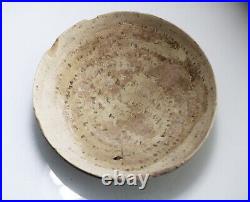 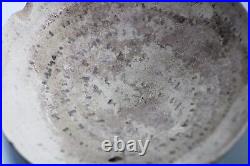 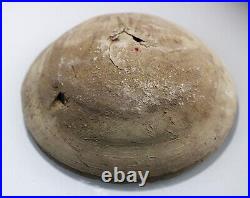 Inscribed with magic texts, these bowls were used to ward off evil spirits and protect family and property. Unearthed at relatively high levels of excavation, they were neglected by the nineteenth century pioneers of Mesopotamian archaeology who were more interested in discovering palace foundations and large- scale sculpture. In more recent years however their importance has been recognised and they have been studied in-depth.

The incantations were written in a variety of Aramaic dialects including Jewish Aramaic, Mandaic and Syriac. There are also examples written in Pseudo-script, presumably by less literate scribes.

Although the texts are not dated they are generally assigned to the late Sassanian/ early Islamic period 6th-8th century A. Their main function was to trap evil spirits and they were often placed upside down at the corners of rooms, or built into foundations or cemeteries. The texts sometimes instruct them to be placed'at the four corners (of the room)' for extra protection. The names of the clients for whom the bowls were made can be divided into two main categories- Semitic and Persian.

However this is not always a reliable guide to their ethnicity. Jewish influence on the Mandaic inscriptions was minimal but is pronounced in the Aramaic incantations. Many of the scribes may have been Jewish or trained by Jews, and the Hebrew Bible is frequently quoted. 14.8 X 5.5. EUROPE : 8 - 14 DAYS.

A & AUSTRALIA : 20 - 35 DAYS, SOME TIMES SOONER, DEPENDING ON LUCK REALLY! BOX 18967, DUBAI, UNITED ARAB EMIRATES. THANK YOU FOR YOUR INTEREST. ALL THE BEST TO YOU ALL. This item is in the category "Antiques\Asian Antiques\Middle East". The seller is "zurqieh_dubai" and is located in this country: AE.